A dummy's guide to shoot a sex scene - Hate Story 3's Karan Singh Grover, Zareeen Khan and Daisy Shah show you how to DO it right!

Watch this exclusive video where the three actors speak about how to do it right when it comes to getting naughty on screen!

Think shooting a sex scene is easy? Ask the actors involved and they will tell you it's one helluva task! Also Read - Mother's Day 2021: From Urvashi Dholakia to Bhagyashree to Geeta Basra – 9 superwomen share their amazing stories [EXCLUSIVE VIDEO]

The big release of this week is Hate Story 3 that is focussed on erotica and revenge drama, like the previous films of the franchise. The last two films have been commendable successes, so the franchise did one thing right with sex. The new film is directed by Vishal Pandya and stars Sharman Joshi, Zareen Khan, Daisy Shah and Karan Singh Grover. The makers of the film have released a behind the scenes video where Zareen Khan, Daisy Shah and Karan Singh Grover speak about their experiences about shooting the lovemaking scenes. Also Read - Mother's Day 2021: Daisy Shah credits her mom for giving her kids the wings to achieve their dreams [EXCLUSIVE VIDEO]

For the first time in their careers, Zareen Khan and Daisy Shah have shed their inhibitions and have gone bold with their roles. So this was certainly a learning experience for them. Karan Singh Grover is already an experienced hand having already shot some heavy duty lovemaking scenes with Bipasha Basu in the horror-thriller Alone. Yet, he confesses he still experiences discomfort while shooting for the same, and also inadvertently reveals the reason behind the blank expression on his face during a couple of sex scenes, like the below. And we thought he was mimicking Kristen Stewart! Also Read - Mother's Day 2021: From Urvashi Dholakia to Bhagyashree to Daisy Shah – 9 superwomen, 9 supermoms, 1 mega event by Zee Digital 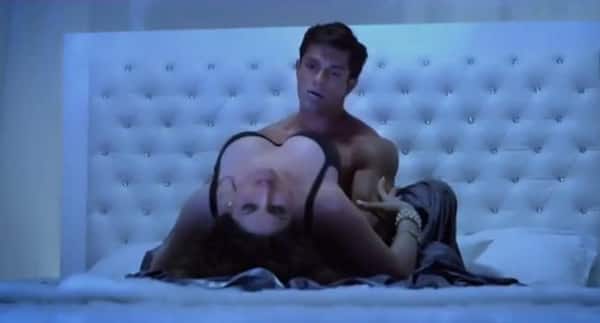 Anyways, here are few tips and lessons we have learnt from the actors about shooting these sex scenes!

# There are a lot of butterflies in your stomach before you shoot for these scenes.

# Even if you are comfortable with your co-stars, there is still discomfort when it comes to sex scenes

# Always make sure that you smell good. Do think twice before you have that burger if you are to shoot a sex scene

# Make sure the nails are cut, and that you have clean inner-wear!

# It's difficult to show excitement on your face (refer to the pic above), when you have to follow a set of instructions, how to handle your co-star properly without errmmm...touching her erogenous zones and staying in sync with her.

# Males have less discomfort about his co-star touching him, compared to females, because he has only one 'sensitive' area!