A Gentleman movie review: Sidharth Malhotra and Jacqueline Fernandez starrer is neither 'Sundar' nor 'Susheel" but a 'Risky' affair

Check out the review of the film and find out why it fails to impress... 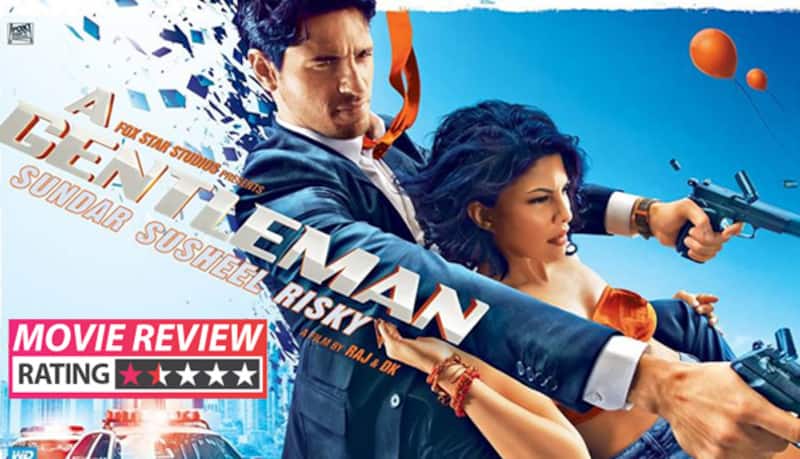 Finally the day arrived, Sidharth Malhotra and Jacqueline Fernandez' A Gentleman has hit the silver screens. The trailers of the film had promised a fun, slick action comedy with hot chemistry between its lead pair. The film also marks the return of Suniel Shetty on the big screen in a reinvented avatar. Directed by Raj and DK, let's find out if the film is able to deliver on the promises it made... Also Read - Cirkus trailer out: Ranveer Singh's dual role brings truckloads of entertainment; Deepika Padukone surprise is unmissable [Watch]

What's It About Also Read - Suniel Shetty, Vivek Oberoi reveal about co-stars who made them nervous, favourite gangster movies and more [Exclusive Video]

The film is about 'Sundar' and 'Susheel' Gaurav (Sidharth Malhotra), who has a perfect job, house, car, mini van rather, friend, all he is looking for is love, in his friend and colleague, Kavya (Jacqueline Fernandez). But according to Kavya he is just a good friend and not her type as he is too safe of a guy. He is no fun. Also Read - Suniel Shetty reveals about his struggles, pressure due to Akshay Kumar's success and more [Exclusive Video]

On the other side there is 'Risky' Rishi, a well trained secret agent of Unit X, run by Colonel (Suniel Shetty). Rishi is best at what he does but all he desires is a home, a family. Things go haywire when Rishi decides to leave his profession and lead a normal life. Colonel, who is suspected by government to run his personal shady stuff in the garb of National security, is not happy about it. Gaurav's life changes when he is spotted by Colonel's men, when in search of Rishi. They are of opinion that he is Rishi, while Gaurav denies... Also read: [Photos] A Gentleman screening: While Sidharth gets busy bonding with SRK; Jacqueline & Sonakshi glam up the movie night

What happens next forms the rest of the film...

This is a good looking film, shot aesthetically in beautiful locales of Miami to grungy streets of Mumbai. The cinematography of the film is fantastic.

Sidharth Malhotra in his dual act of Gaurav and Rishi gives a fine performance . He makes sure that he plays those character as distinctly as possible. Jacqueline Fernandez has never looked this hot in any of her previous films. She is a sight for the sore eyes. Suniel Shetty has a great screen presence in his limited role. And his reinvented avatar is indeed godly. Darshan Kumar is fine. Amit Mistry gets a few chuckles. A scene featuring Rajit Kapoor and Supriya Pilgaonkar is funny. However, it is Sidharth's friend and colleague played by Hussain Dalal, who is the scene stealer in the film. His awkward Dixit is damn funny and the only saving grace.

There's plenty that's wrong with the film. First and foremost, films like A Gentleman, that promised fun, slick action and entertainment lacks in all the departments. There is plenty of action in the film, but it's nothing you haven't seen before. There is plenty of style in the film but again nothing you haven't seen before. Also the biggest drawback of the film is its pacing. The first half takes too much time in establishing all the characters. It is only in the second half that the actual story that was promised in the trailer starts. The second half had its moment but they were too far and less.

Suniel Shetty who was visible in the trailers had nothing but a guest appearance, so the fans of the actor who were hoping to catch Anna in action after a hiatus, should stay away from this one.

The love track between the Sidharth and Jacqueline lacked soul. There was zero chemistry between them. Trust me when I say it, they shared a better and hotter chemistry when they appeared on Koffee With Karan 5, earlier this year. It's a half baked love track at best.

The songs, even though only three, are bad. Talking about the talented director duo of Raj and DK. After helming brilliant films like 99, Shor In The City, Go Goa Gone or even a below average, Happy Ending, I was hoping this one to be a mad fun but it's their weakest film. The story and plot was too flimsy and offered nothing new. In fact the "big twist" was so predictable that you could see it coming since the first shot of the film. Also read: Sassy, spunky, street style chic and a dash of ethnicity – Jacqueline Fernandez dabbles it all for A Gentleman promotions – View Pics

Overall, A Gentleman is neither 'Sundar' nor 'Susheel' but turns out to be a 'Risky' affair for Sidharth Malhotra and Jacqueline Fernandez. The film has nothing going in its favour and can be easily avoided. In plain and simple words - It's Boring.