Aaliyah Kashyap finds support from Khushi Kapoor, Alaviaa Jaaferi, Kalki Koechlin as she speaks of the trauma caused due to rape threats after lingerie pics

Aaliyah Kashyap had put up a post on how the trolling over her lingerie pics affected her mental health. The young lady got support from Khushi Kapoor, Kalki Koechlin and others

Aaliyah Kashyap, daughter of filmmaker Anurag Kashyap is right now in the US. Some days back, she had posted a series of pics in lingerie. It looks like she was doing a campaign for an UK-based underwear brand. As expected, trolls wrote rubbish under her posts. The sad part was that she even received rape threats for the same. The young lady took to social media to document how these threats affected her mental health. She wrote that as a nation we do not seem to believe in protecting a woman when she is weak. She said that sexualising women was routine, and it was vile. Also Read - Anurag Kashyap's daughter Aaliyah thanks boyfriend Shane for 'The Best 365 days' as they complete a year of togetherness

In the post, Aaliyah Kashyap writes, "The past few weeks have been really hard on my mental health. Ever since I posted a photo of me in lingerie, I have been getting the most vile, degrading and disgusting comments. I have never felt more frightened than I have in the past few weeks to the point where I considered deleting my instagram. I have tried to ignore the harassment and shrug it off but the truth is that we need to speak about it because these kind of comments contribute to the rape culture that affects all women in India (and the rest of the world) in one way or the other." Also Read - Filmmaker Anurag Kashyap's daughter Aaliyah Kashyap opens up on battling mental health issues — watch video

Friends of the young lady have come out in her support. Khushi Kapoor wrote that she was proud of Aaliyah Kashyap. Kalki Koechlin said that she was proud of Aaliyah for sharing this on social media. The mother-daughter duo of Deanne and Alanna Pandey also extended their support to the young lady. We are sure that Aaliyah must be feeling motivated after seeing this overwhelming support from the fraternity. Here is a look at the celebs who have supported her and it includes many names... Also Read - Suhana Khan, Krishna Shroff and more star kids who are social media superstars 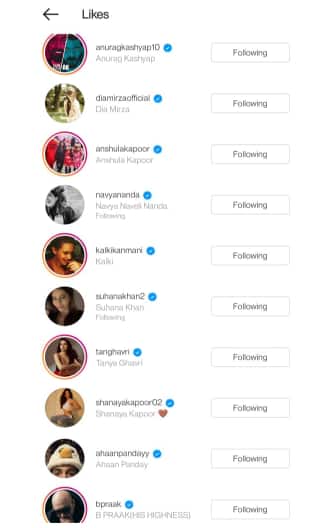