The actor threw his weight behind her and she's ELATED! 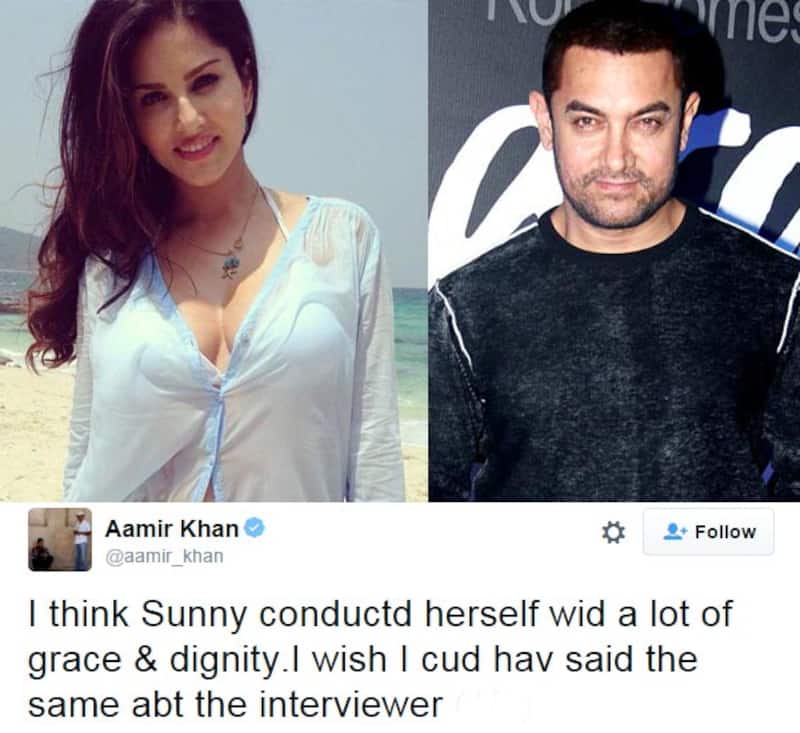 She shut him down and everyone rallied behind her including Mr. Perfectionist of Bollywood...

For Sunny Leone, it was just another interview for the promotions of her film Mastizaade but it seems for Bhupendra Chaubey, a senior journalist with a leading news channel, it was opportunity to make her feel responsible for whatever is wrong with Indian men's mentality. Despite being targeted viciously, Sunny stood her ground with so much grace and calmness that it can easily be a bible for a lot of actresses. She didn't shy away from answering any question even when the journalist was out to pin her down for her porn past. Quite obviously, Bollywood wholeheartedly supported Sunny and her graceful replies including the Dangal man Aamir Khan. The actor today posted a tweet supporting Sunny and slammed the interviewer. The girl was over the moon about the tweet! Also Read - Raksha Bandhan box office collection day 1: Akshay Kumar starrer expected to open at THIS low figure – trade utterly disappointed

Sharing an article on how Chaubey treated Sunny by inviting her to his show, Aamir writes, "I think Sunny conductd herself wid a lot of grace & dignity.I wish I cud hav said the same abt the interviewer (1/2)…" We totally agree with you Aamir. The man seemed visibly disturbed that Sunny doesn't give two hoots about people who can't think beyond her 'porn queen' status. In fact, when she seemed unfazed by a lot of questions that he hurled at her, he got down to her body. Shame on him and it seems Aamir too believes he crossed a line here. And Sunny just couldn't stop swooning over it. She replied to Khan's tweet saying, "I think my heart just dropped seeing this!! Thank you so much for the support. It means the world and beyond to me!" Also Read - Laal Singh Chaddha box office collection day 1: Aamir Khan starrer set to open at THIS low number – clocking at lowest end of trade expectations

The growing support for Sunny is a proof that people have accepted her as a Bollywood actress and it times others do too. Check out Aamir and Sunny's tweet once more... Also Read - Laal Singh Chaddha vs Raksha Bandhan low box office collections day 1: Is boycott trend real culprit? These drastically changed ticket rates show the HARSH truth

I think Sunny conductd herself wid a lot of grace & dignity.I wish I cud hav said the same abt the interviewer (1/2) https://t.co/TDDHOlbOUL

I think my heart just dropped seeing this!! Thank you so much for the support. It means the world and beyond to me! https://t.co/ayZmahPcIr