Aamir Khan turns make-up artist for daughter Ira Khan; here's what she has to say about his 'skills'

Laal Singh Chaddha actor Aamir Khan told his daughter Ira Khan that he wants to do her make up. Check out Ira's reaction to the same and what she has to say about her new makeup artist.

Aamir Khan's daughter Ira Khan took to her Instagram handle and shared a couple of pictures with the Laal Singh Chaddha actor. However, they are not some event photos or pictures from Ira's childhood. They are the latest pictures. The father-daughter duo were seen bonding today over 'make-up'. Yep, you read that right. Aamir Khan turned make-up artist for his daughter. Ira Khan couldn't help but flaunt the pictures and her make-up on social media. She revealed what really happened in her Instagram caption. Also Read - Mia Khalifa flaunts curves in see-through lingerie; WARNING – view pics only when you’re alone

Ira revealed that her father aka the Dhoom 3 actor walked up to her and sort of challenged her that he can do her make-up better than she can do on her own. Ira said, "Guess who did my make-up? It's interesting when your father walks up to you and claims he can do your make-up better than you can..." She also revealed what she thought about her dad's make-up skills. "...and he turns out to be right." Ira Khan also teased fans whether they wanted YouTube tutorials for the same. "Who needs YouTube tutorials?!" she asked in the caption. Check out the post here: Also Read - Neha Dhupia spotted with her daughter, gets SHOCKED and runs away after seeing paparazzi; netizens say, 'Overacting'

A couple of minutes ago, Ira Khan took to her Instagram stories and shared a selfie. It was an announcement post. Ira revealed that she would be coming live with her 'make-up artist'. '"Going live tomorrow with my make-up artist. A.K.A my dad See you!" she wrote on the picture. Ira is seen in a crop top jacket and denim. Check it out below: Also Read - KGF 3: Hrithik Roshan to join the cast of Yash starrer? Makers REVEAL 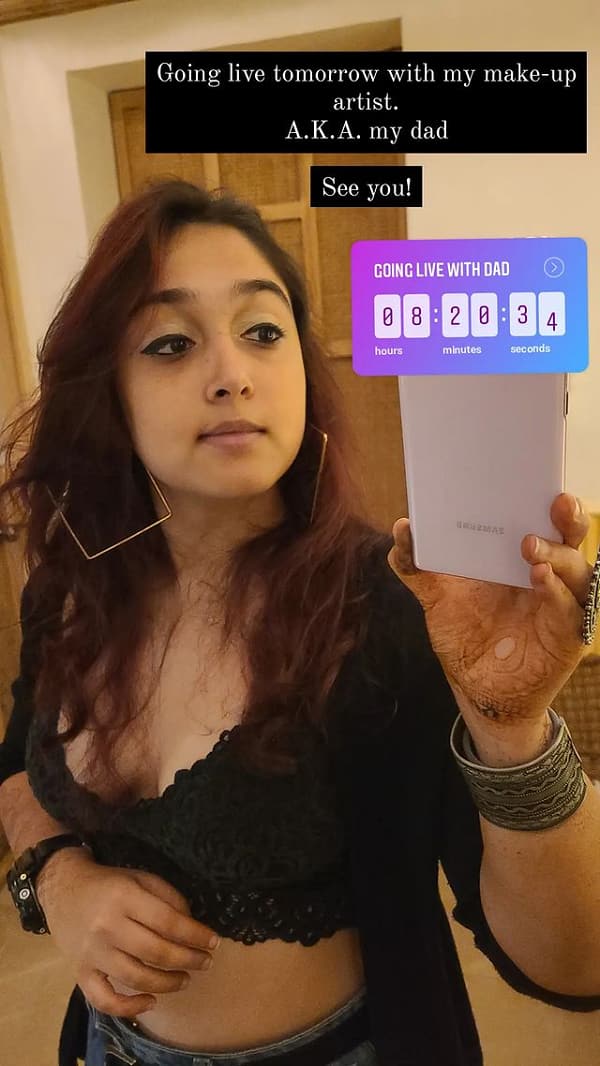 Meanwhile, tomorrow is the day when Aamir Khan is going to make an announcement. A couple of days ago, Aamir had shared a video and said that he will be sharing a 'kahani' on the 28th of April. It seems Ira is also associated with this thing.