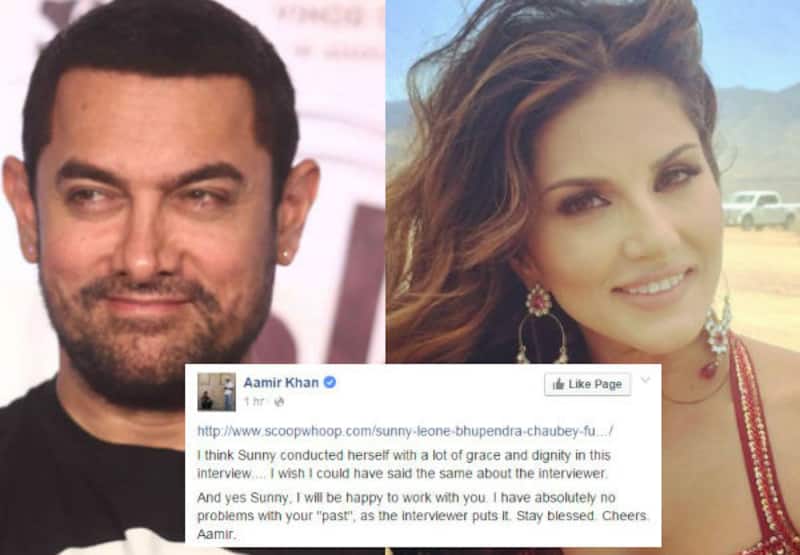 Bhupendra Chaubey, you have your answer here...

A few months back, Aamir Khan and Sunny Leone got into a 'lovely' Twitter banter that raised many eyebrows. It is believed that big stars don't want to share screen with Sunny Leone for her past. But his tweet moments with her silenced one and all. Yesterday, Bhupendra Chaubey, senior journalist, made a great hullabaloo about the fact when he asked Sunny if she thinks Aamir will ever work with her. He probably felt Aamir not wanting to be part of a Sunny Leone film is a vindication to the fact that she has a shameful past which she isn't ashamed of by the way! But now, we think Bhupendra Chaubey, has his answer. Aamir wrote on Facebook that he will very much work in a film with her! Also Read - Raksha Bandhan box office collection day 1: Akshay Kumar starrer set to open at THIS disappointing number – clocking at lowest end of trade expectations

Burn Bhupendra Chaubey burn! Your triumph in proving that no A-lister wants to work with Sunny by suggesting Aamir might never work with her goes down the drain. Aamir who earlier tweeted in support of Sunny, completed the message on Facebook saying, "I think Sunny conducted herself with a lot of grace and dignity in this interview.... I wish I could have said the same about the interviewer. And yes Sunny, I will be happy to work with you. I have absolutely no problems with your "past", as the interviewer puts it. Stay blessed. Cheers. Aamir!" Also Read - Laal Singh Chaddha box office collection day 1: Aamir Khan starrer set to open at THIS low number – clocking at lowest end of trade expectations

http://www.scoopwhoop.com/sunny-leone-bhupendra-chaubey-full-interview/I think Sunny conducted herself with a lot of...