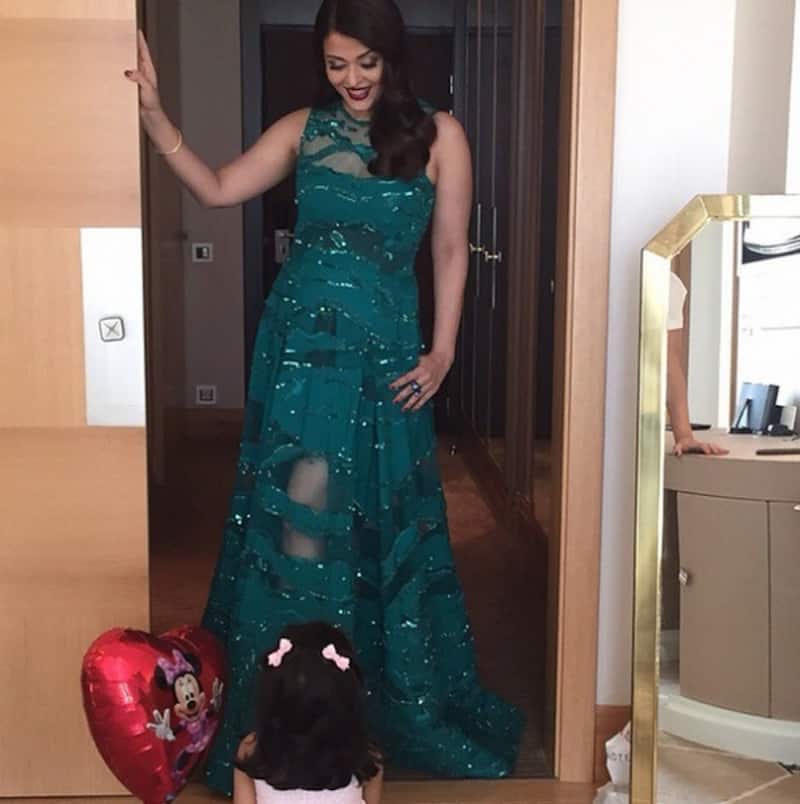 The actress who will be seen on the silver screen after a hiatus of 5 years says that her daughter doesn't think of paps around her as unusual. She also talks about Cannes, her film Jazbaa and more. Read on for excerpts...

It’s been five years since we saw Aishwarya Rai Bachchan grace the big screen. The actress, who is making a comeback in Jazbaa, is currently making waves in Cannes where she is making red carpet appearances for L’Oreal and promoting her film. We caught up with Ash on FaceTime chat where she reveals why she is excited to watch Jazbaa on screen, why she did not want the typical naach-gaana routine for her comeback film and why she didn’t meet Sonam Kapoor and Katrina Kaif at Cannes. Also Read - Janhvi Kapoor, Alia Bhatt and more: A sneak-peek at Bollywood stars' phone wallpapers

Fourteen years is a long time! But what’s lovely is how these experiences have changed through the years. It started with Devdas, then being a jury member, the first time I came here for L’Oreal, then getting to know the other brand ambassadors. There are changes that happen within the company and in the festival, so I had to embrace that. Then I got married, and wherever I went, people were congratulating me. So I keep joking, ‘My marriage reception went on for two years.’ I felt like a blushing bride for the longest time. Then, I delivered Aaradhya and I came back here again. She was six months old when I first got her to Cannes. Then again when she was one-and-a-half, two-and-a-half and now three-and-a-half. So I keep saying this to everyone that the ‘and a half’ portion of Aaradhya always gets completed here at Cannes. That’s our own little personal celebration that we kind of have. My mum’s birthday is on May 23. So, invariably, I am also here for that. So this is an interesting connect — my mum, my daughter and me — all have our personal milestones happening at Cannes. And yes, I am a mother and it’s interesting to see Aaradhya grow up so quickly. Also Read - Nora Fatehi to Alia Bhatt: Bollywood Divas who revealed their vulnerable side and cried in public

How does Aaradhya react to the media around you?

I think the first reaction was curiosity and wonder. The photographers are always clicking her pictures whenever we come out of or go to the airport. Then there is always a crowd outside the house. So she feels it must happen to everyone. So this has become normal to her now. She now knows that this is life. But the mother in me will always be protective about her. Nothing against anybody. The media will have to get their photographs and their bytes so each one tries and then there’s so much chillam-chilli. As a mother, I will always make sure that dhakkam dhukki mein, no one falls. Khud bhi na gire aur Aaradhya bhi na gir jaaye. That’s a natural instinct which will always remain. But from her, I don’t think there’s any major chatter about it. She’s completely normal with the paparazzi.

With prominent faces from Bollywood like you, Sonam and others being regulars at the Cannes Film Festival, how much do you think your presence is broadening the global reach of Indian films?

Honestly, this is something you already have an answer to. (Grins) There’s always an effort to do the best we can for our country and our industry. It is my 14th year in Cannes that I have been representing the Indian film fraternity. Whenever I get an option to represent my country, I always happily take it up. I feel blessed to have had so many opportunities to make my country proud.

Coming to the Cannes Film Festival, my relationship with it started right after I came here for Devdas. Then of course, I was here as a jury member and a brand ambassador for L’Oreal. That has lasted for almost 13 years now. Yes, we do walk the red carpet but at the same time, we get to interact with all the stalwarts of the business. I am an actor and I belong to cinema after all. Many people ask me, ‘Why aren’t Indian films getting much mileage at the Cannes?’ At the end of the day, this is where cinema comes and explores newer markets for exhibition. To get that opportunity, your film should not be released. In Bollywood, most people like to release films from July to February. Then how do you make a movie you take to Cannes? People are making movies to entertain the audience so they will be like, ‘Humein toh release karna hai film.’ There are certain films which specifically get made for the festivals and there are filmmakers who do that and will repeatedly bring their projects here. No place of judgments for either.

Your association for L’Oreal has been a long lasting and fulfilling one..

L’Oreal has always come up with the best products for me. There is a lot of science that goes into understandingwhich product will work for which market. They always keep the tonal qualities of different countries in mind while making the products. 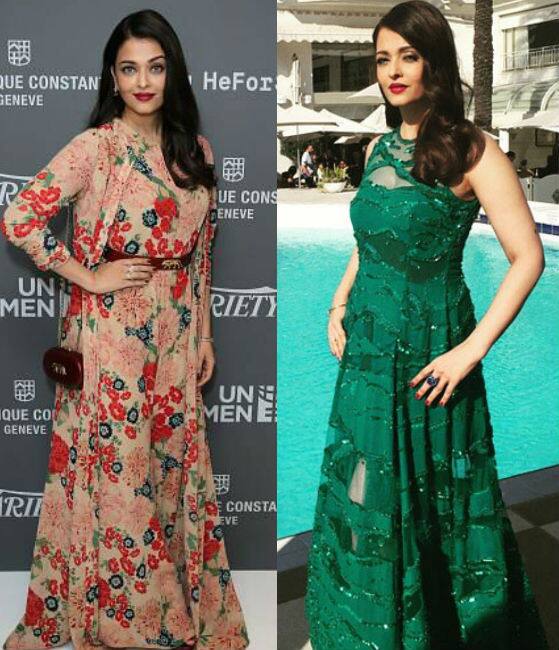 Katrina and Sonam too walked the red carpet. Did you get a chance to interact with any of them?

No, actually we all reached on different dates. Our schedules were so tight that it never permitted us to have a chat session, unfortunately!

It depends on the market and the exhibition. Like, the commercial films that we make in Bollywood are typically made for the Indian markets and the overseas markets where it is recognised as an Indian commercial movie. People will be surprised to know that there’s a huge market for some films, which might not work commercially, per say, in India. That’s something I came to know about once I started becoming a regular at these film festivals. Once you start coming to the place where world cinema literally meets, you get to know a lot of things, figure out what’s going on in world cinema which is liberating. 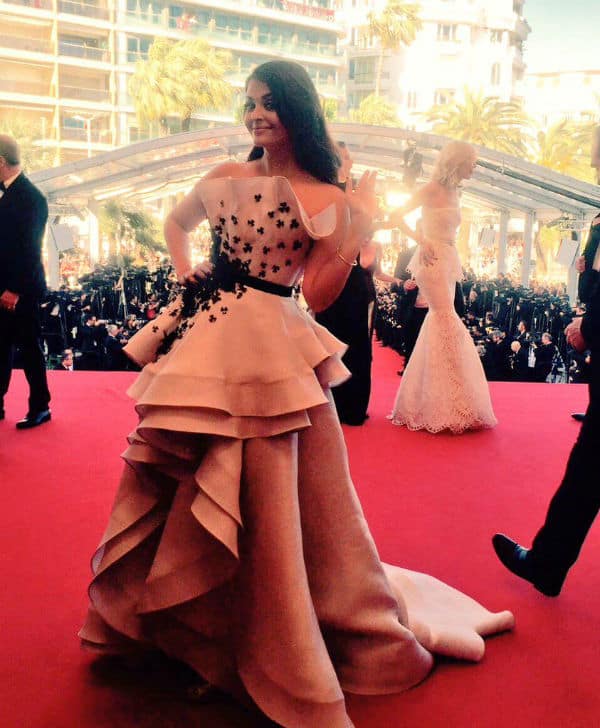 The first poster of Jazbaa released in Cannes. How was the reception?

I am not on social media but I got to know that the film was trending in India at #1 and globally at #8 which is a big thing for me and the film. I am happy that the film is getting recognised. Even here, the reporters were telling me how Bollywood has suddenly become more topical. Now that’s possibly the best thing to hear as an Indian actor. Sanjay also showcased a small trailer here at Cannes for the media. The response to that also has been overwhelmingly positive. 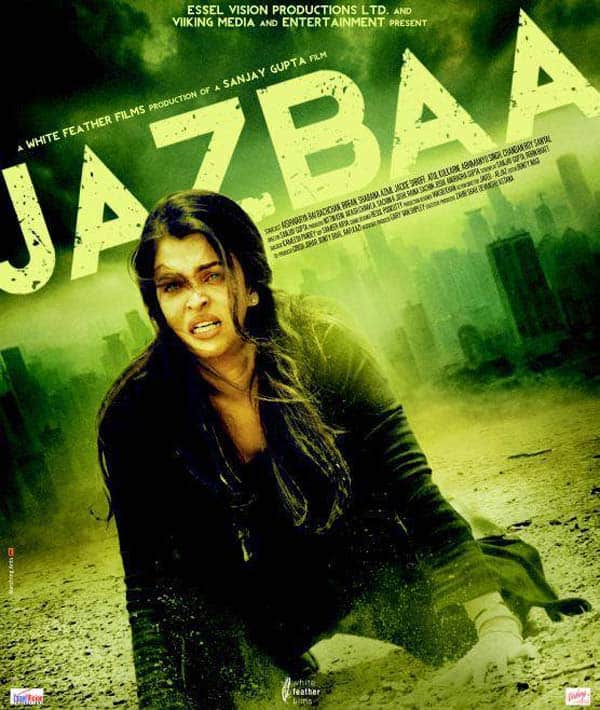 I would not deny that (Giggles). Jazbaa is a serious subject. I hate the ‘comeback’ title. But I know this word will stay. I cannot help it (Smiles). I have always said I never went anywhere. I have always been here. But it’s also a fact that Jazbaa will be perceived as that comeback film. But for me, it’s a film I chose. I never thought about a comeback or anything. Jazbaa has a very strong subject and I am definitely not playing to the stereotypes. There’s a common perception that ‘bhai dekho, yeh meri comeback film hai, so main gaana gaungi, nachungi, costumes acche pehnungi.’ But no, with Jazbaa, it’s totally different. It’s a film with a very interesting and strong plot, and it has got an amazing team to work on it.

How challenging was it for you to perform the action stunts in Jazbaa?

(Laughs) You do what you have to do for a particular film. For Jazbaa, my character needs to do all the stunts and I did. Sanjay had discussed and mentioned it right at the start of the film.

After five years. Is there any pressure to deliver again?

No, I believe the pressure is on Sanjay. Not on any of us! (Laughs) Yesterday, after the overwhelming reception of the trailer and the poster here at Cannes, he said it himself that there’s so much more responsibilities and pressure on him to make Jazbaa a great film. To tell a story like this, in Sanjay Gupta’s directorial language, is something absolutely interesting. He is recognised for a certain kind of cinema which has always been so strongly male-centric. I keep joking that his films are totally testosterone-induced. There’s certain pattern which he follows — the way his sounds are made or his films are edited. There’s a certain cinematic language that you associate Sanjay’s films with. It can run through anybody’s mind who knows him and his cinema. So it was more interesting when I came to know that he’s making a film on a subject like this, which totally celebrates the power of a woman. When Sanjay makes a story on a single mother — a criminal lawyer — who’s daughter gets kidnapped and she goes through trying circumstances, it’s interesting to see how he is going to tell the story. When I came on board, I also had the same question. So I keep teasing him saying that ‘October mein, it’s not just you, but even I am excited to see how the film eventually looks’. So I am equally curious and excited to see Sanjay Gupta’s Jazbaa!