Ae Dil Hai Mushkil: Ranbir Kapoor and Aishwarya Rai Bachchan are closer than before in this third teaser poster

Before the teaser excites you tomorrow here is the third poster to get you drooling already!

And so it begins! The marketing and promotions of the Karan Johar film Ae Dil Hai Mushkil has been started. Two posters of the flick were released earlier in the day and just now the third teaser poster has hit the internet. And dayumm, this one is going to impress you, like the first two have not enough already. This new poster features Aishwarya Rai Bachchan and Ranbir Kapoor getting closer to each other, more than the two were in previous posters. Who is not happy looking at this? Ding ding ding! Anushka Sharma! Her character is looking angry on this poster. We are guessing this is where the masala of a love triangle comes in. Also Read - Tuesday Trivia: Did you know Aishwarya Rai’s daughter Aaradhya Bachchan once thought Ranbir Kapoor was her father and also had a huge crush on him?

Ranbir and Aishwarya's embrace looks damn hot! We cannot wait to get the tease at their intimate scene in the teaser of Ae Dil Hai Mushkil that is releasing tomorrow on digital platforms. Yep! If you did not know already, Aish and Ranbir will be seen doing some smokin hot scenes in the film, first look of which will be there in the teaser. Yea we got to watch the teaser, and decided to share this dope news with you beforehand. Also Read - 5 times Shah Rukh Khan charmed us with his surprising cameos in these Bollywood films

Also in the background you can see a few glimpses from the film in the third poster of Ae Dil Hai Mushkil. You can see Ranbir singing his lungs out into a microphone. Wait is he playing a Rockstar like character again? Because we also saw that his character has a melancholic look on his face in the teaser. We also see silhouettes of two characters dancing, which I am guessing are Anushka and Ranbir. They are shaking a leg while listening to music by sharing earphones - how cute! And there is also Ranbir and Aishwarya, what looks like, rollerblading! 20 bucks Aishwarya falls in this scene and Ranbir catches her in his arms before she can hit the ground. Also Read - Red lips, wet hair: Throwback to when Aishwarya Rai Bachchan turned into a seductress and wooed five men

Also, while the second poster reminded us of a poster from Yeh Jawaani Hai Deewani, this third poster is also reminding us of a film. It somewhat resembles the poster of YRF flick Veer Zara featuring Rani Mukherjee, Preity Zinta and Shah Rukh Khan. Don't you think so? 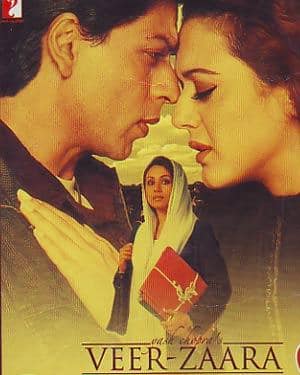 Karan Johar is a master of his art. He can for sure stir emotions inside you right in middle of glitz and glamous in his films. His upcoming film which is an intense romantic drama, looks like no exception. The film is said to be on the lines of Rishi Kapoor and Rakhee’s Doosra Aadmi (though the makers are denying this time and gain). Ranbir, Aishwarya and Anushka play the main leads in the film, with Pakistani heartthrob Fawad Khan having an important role in the film. Also, present in key roles are Lisa Haydon, and Imran Abbas Naqvi, who are two pretty looking people themselves! Buzz is that Karan aims to make the most 'good-looking' film Bollywood has ever seen! With a cast like that he is halfway there already. 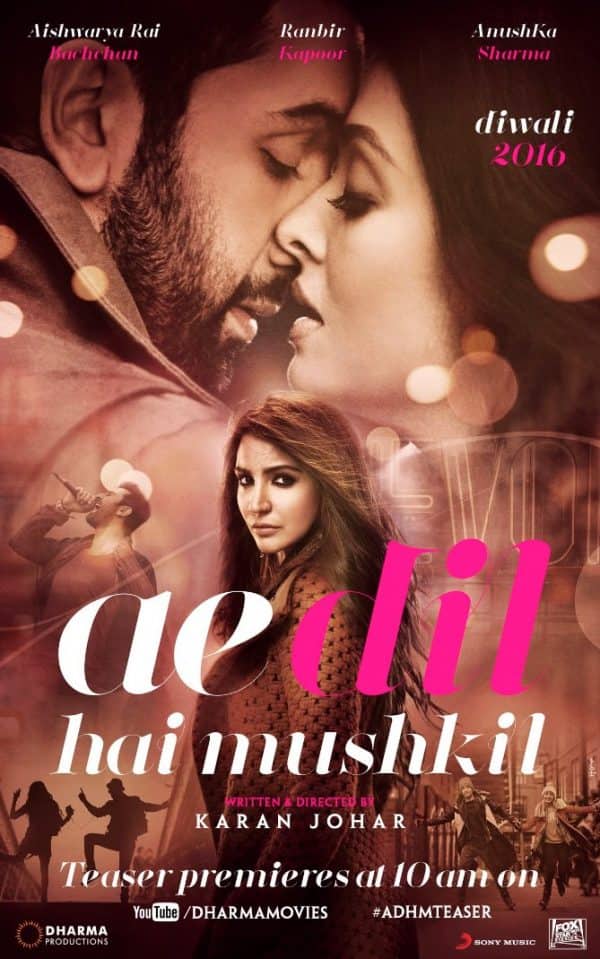 The film is slated to release during Diwali and is all set to lock horns with Ajay Devgn’s ambitious directorial Shivaay. Now if you think about it that is going to be one hell of an interesting clash. While one is an out and out action flick, the other one is a Karan Johar film! Which one will you pick? Give us a hint in the comments section below!