The teaser is out tomorrow...

We have earlier covered the first poster of Ae Dil Hai Mushkil. Now the makers have released the second teaser poster of the film, which has only Ranbir Kapoor and Anushka Sharma. So expecting the third one with Ranbir and Aishwarya Rai Bachchan soon. Also Read - Friendship Day 2021: From Shah Rukh Khan-Salman Khan to Priyanka Chopra-Kareena Kapoor – 7 Bollywood BFFs who turned foes and then became friends again

And yeah, we also need one with Fawad Khan. ASAP! Also Read - Tuesday Trivia: Did you know Aishwarya Rai’s daughter Aaradhya Bachchan once thought Ranbir Kapoor was her father and also had a huge crush on him?

Anyways, coming back to the second poster, the one is all about giving out happy feels. And it's also kinda similar to the first poster of Yeh Jawaani Hai Deewani, which you can check out above. Also Read - 5 times Shah Rukh Khan charmed us with his surprising cameos in these Bollywood films

The difference here, is that in the Ae Dil Hai Mushkil poster, Ranbir Kapoor is shown in a singing pose with a mike in his hand, while in the Yeh Jawaani Hai Deewani poster, he is in a full on masti wala dance pose. However, Anushka's laughter in the poster is quite similar to Deepika's in YJHD poster. Even their pose is kinda similar. Whether this is deliberate or not, we can't say, since both the film come from the same production house.

Interestingly, there was a rumour, that while shooting for the special music video for the female version of Jag Ghoomeya, Anushka had threw a fit, because the setting of the song was quite similar to that of Alia Bhatt's Main Tenu Samjhawan video. If that was true, we wonder what she will have to say about this. 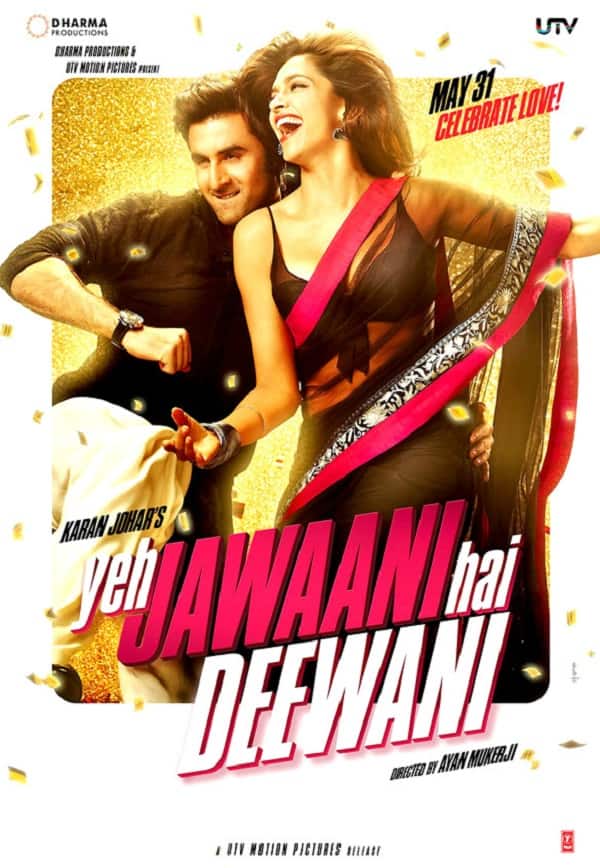 Ae Dil Hai Mushkil is an intense romantic drama, starring Ranbir Kapoor, Aishwarya Rai Bachchan and Anushka Sharma, with Pakistani heartthrob Fawad Khan having an important role in the film. Fawad, who is missing from both the teaser posters, will be seen in the main poster. The teaser of the film will be out tomorrow at 10 am, so please book your time slot for that. After all this is one of the most anticipated films of the year.

Ae Dil Hai Mushkil will be Karan Johar's sixth directorial, with his last film being Student of the Year that was released four years ago, and gave us three new stars in Alia Bhatt, Sidharth Malhotra and Varun Dhawan. Shah Rukh Khan is reportedly playing a cameo in the film, where he is said to be playing Aishwarya's former love interest, and had replaced Saif Ali Khan, who was originally supposed to do the role.

The film is scheduled to release during Diwali and clashes with Ajay Devgn's ambitious directorial Shivaay.