Kangana Ranaut has jotted down some reasons as to why south content and superstars are such a rage adding that they should not allow Bollywood to corrupt them.

The success of Pushpa across northern India only has validated Allu Arjun's belief that even if the plot is region-centric, its authenticity and the conviction with which the movie is made will appeal to audiences. The story of Pushpa is centred around the Rayalaseema region in southern Andhra Pradesh, yet it was this past year's biggest pan-India hit. After its roaring box office success, Bollywood actress Kangana Ranaut has jotted down some reasons as to why south content and superstars are such a rage and added that they should not allow Bollywood to corrupt them. Also Read - Kangana Ranaut complains that Ajay Devgn will never promote her films; reveals Akshay Kumar called her secretly after Thalaivii

Taking to her Instagram stories, Kangana shared the reason of South content's growing popularity. "Some of the reasons why south content and superstars are such a rage: 1) They are deeply rooted in Indian culture 2) They love their families and relationships are conventional not weternised 3) Their professionalism and passion is unparalleled," Kangana wrote and further added, "They should not allow Bollywood to corrupt them". Also Read - Naga Chaitanya starrer Thank You locks release date; chooses not to follow in RRR, KGF 2, Pushpa's footsteps 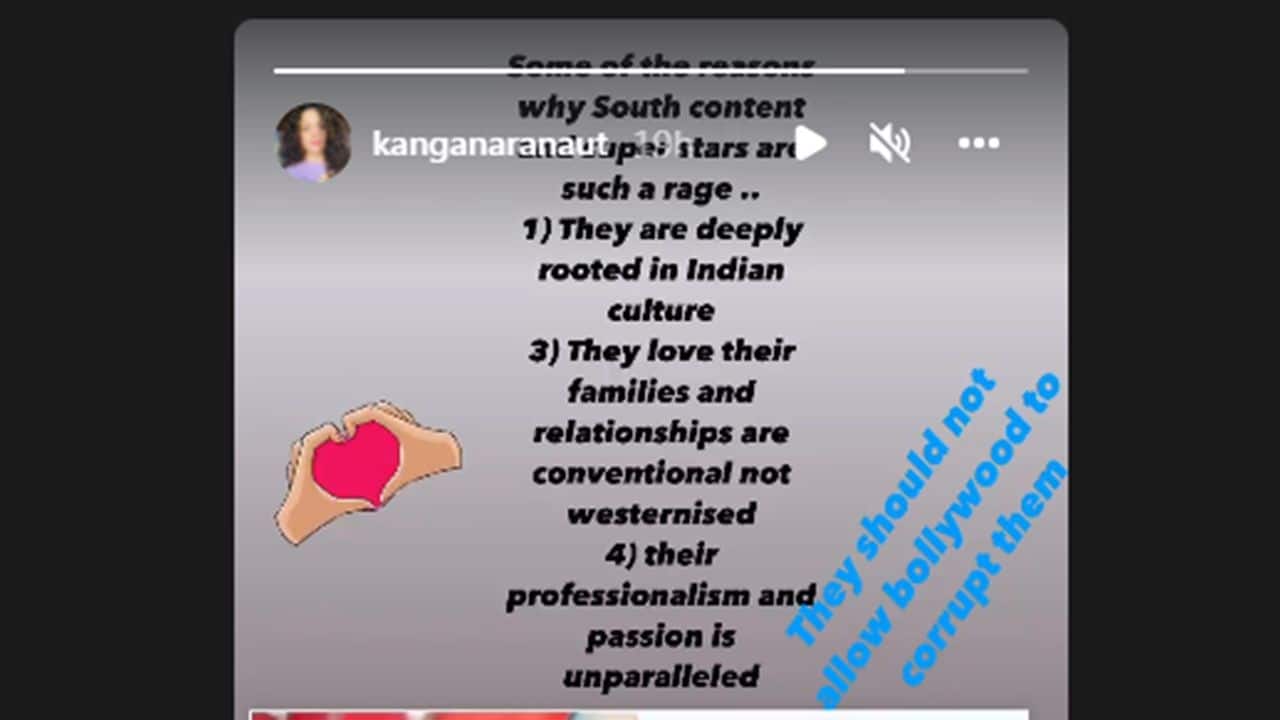 Having its roots in Telugu, Pushpa: The Rise has made its mark in every corner of the country. Directed by Sukumar, it was released on December 17 and has scored massive success at the box-office with its collections. The sequel Pushpa: The Rule is expected to go on floors in March this year.

On the work front, Kangana, who is known for speaking her mind, took to Instagram, is gearing up for her next Dhaakad, an action thriller, which was slated for an April 8, 2022 release. It has now been pushed to May 2022. She also has Tejas. The movie revolves around a daring female pilot played by Kangana and is based on how women pilots can play a important role in keeping our nation safe from external forces. It is a tribute to the brave soldiers of the country.