After India beat Australia, Anushka Sharma reveals why hubby Virat Kohli is 'so easy to love'

Sharing a screenshot of Virat Kohli's big-heartedness after he asked Indians and cricket enthusiasts to not boo Steve Smith on the field, proud wife Anushka Sharma couldn't help but gush about her man. Check out her Insta story here!

Can Anushka Sharma and Virat Kohli, stop being so goddamn cute? Guess not! After their magical wedding which, believe it or not, still gives us jitters, the duo have always managed to hand out books on #CoupleGoals whenever they step out and we have been gushing ever since. In fact, the duo has been spending a lot of quality time lately which meant our timelines were flooded with mushy and loved-up pictures, but hey, we are not complaining! From Australia to New Zealand, Anushka made a point to be by the side of her hubby dearest, after her last release Zero and it was a treat for the sore eyes. And even now, when Virat is out there trying to win us the World Cup with his team in England, Anushka is the biggest cheerleader back home.

Pari remake in Tamil to feature Anushka Sharma? Here's what we know

She even took to Instagram to share an Insta-story about the great man she married and his qualities that make it so easy to love him. Sharing a screenshot of Virat's big-heartedness after he asked Indians and cricket enthusiasts, to not boo Steve Smith on the field, the actress wrote, "Aggressive player, benevolent man - so easy to love! <3" Also Read - India vs Australia live: Ayushmann Khurana's LIVE tweet commentary is something to watch out for! 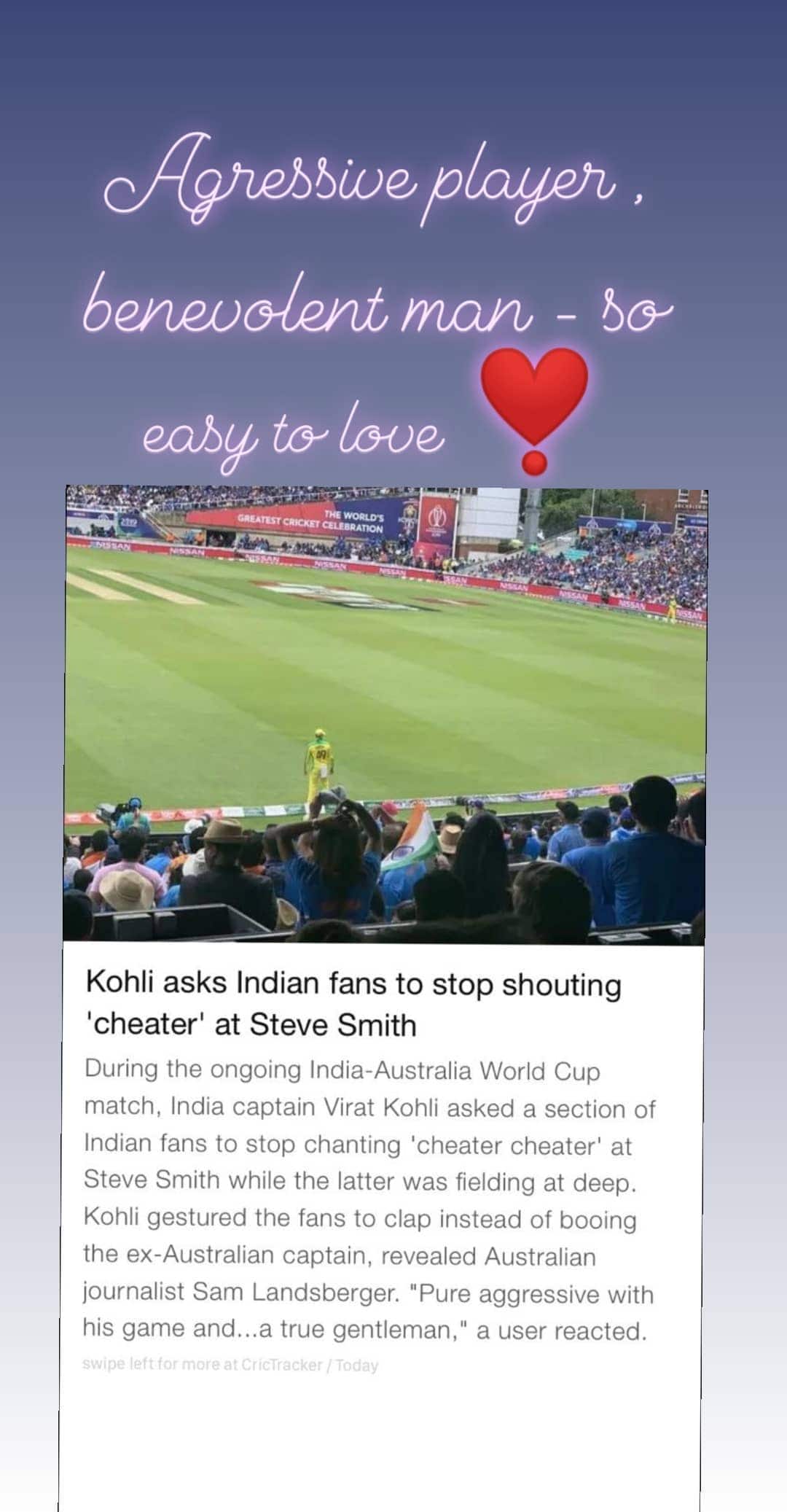 Also Read - India vs Australia live: This is the HILARIOUS way Rannvijay Singha and Manish Paul are supporting India!

If you're not in the know, Indian fans gave Steve Smith a tough time fielding in the deep because of the ball tampering fiasco last year, when Virat Kohli suggested they applaud the Australian instead. Here's the video of the class act.

Meanwhile, recently in an interview, when Virat was asked about his married life, he couldn't stop praising his beloved wife. Showering praises on Anushka, he had said, "I think over the last more than a year or so, the best thing to have happened to me is me getting married. It's literally changed my whole world. I have the most beautiful wife, the most beautiful person."

On the work front, reports suggest that Anushka is planning to don the director's hat. It is being said that she will be directing a film for her own production house. But, there is no confirmation from the actress. Meanwhile, recently there were rumours about Anushka's plans of quitting acting. With a BTS video from the sets of her film/ad shoot, Anushka also quashed all the rumours and made it clear that she had no plans to take a break from acting anytime soon. Stay tuned to BL for more updates and scoops.