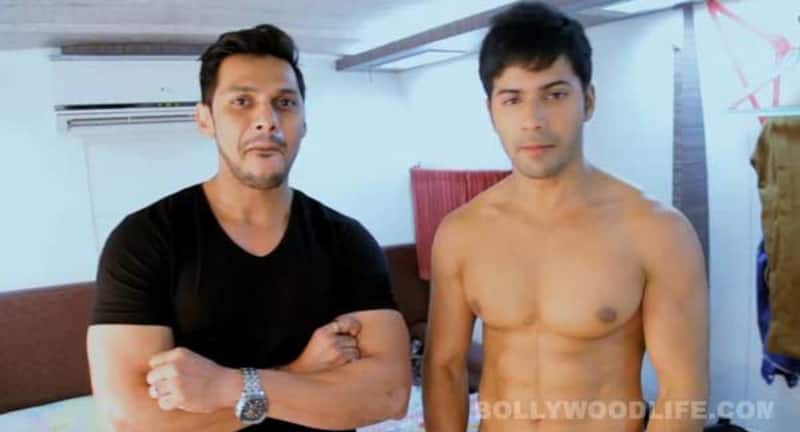 For his second film Main Tera Hero, Jr Dhawan seems to have gone the Ranbir Kapoor way. Yes, the handsome lad says he has turned absolutely besharam for his upcoming film

After making a smashing acting debut with Karan Johar’s Student Of The Year, Varun Dhawan is now gearing up to woo the audience with his next film Main Tera Hero. The SOTY dude is back to playing a college student but it wasn’t easy this time around coz Main Tera Hero is a typical masala entertainer flick with loads of comic punches and spoofs. Pulling off this role would have been impossible for VD without becoming besharam. Well, that’s what the talented actor says in the behind the scenes video of Main Tera Hero. In his words, ‘an actor has to hit his besharami ki height when he does a film like MTH’. Besides taking about his crazy character, Varun is also seen imitating superstar Salman Khan’s act from Bodyguard in the video. Looks like David Dhawan’s laadla beta has spoofed every B-town actor in his comic caper. The talented actor also reveals that he has sported seven hairstyles in his father’s directorial venture. In fact, Varun’s also paid a lot of attention to his shoes. Why should girls have all the fun, hai na? Giggle… Also Read - Liger: Vijay Deverakonda channelises his inner Raj from DDLJ as he carries Ananya Panday in sarson ka khet, drives a tractor and drinks lassi [View Pics]

Bollywoodlifers quickly check out this entertaining video for Varun Dhawan - who is funny and also flaunting his perfectly chiseled body. Lethal combination wethinks! Also Read - From disrespecting Hina Khan, Helly Shah for their Cannes appearance to calling Nayanthara a lesser star; 5 times Karan Johar proved he needs to think before he speaks