After Siddhant Karnick, Aditi Sharma supports Drashti Dhami against the backlash over her role in Silsila Badalte Rishton Ka

Drashti Dhami, Shakti Arora and Aditi Sharma's current show, Silsila Badalte Rishton Ka has been making headlines since its launch. It not only marked Shakti and Drashti's return to the small screen, but also talks about a bold topic. While infidelity is one of the current hot topics of telly town, the show's storyline has become the talk of the town. Though the critics and the audience have been raising questions on such a bold topic, Drashti has been getting hate messages for playing the other woman in the show. Siddhant Karnick, who is her good friend and former costar from Ek Tha Raja Ek Thi Rani recently came out in support of the actress and now Aditi too is supporting the actress. Also Read - Crashh Trailer: Anushka Sen, Rohan Mehrra, Aditi Sharma and Kunj Anand starrer is inspired by 1997's Bandhan

Aditi took to social media to share some kind words for Drashti and asked the viewers to stop sending hate messages and encourage her for playing this bold character. Drashti appreciated the gesture with loads of love emoticons. 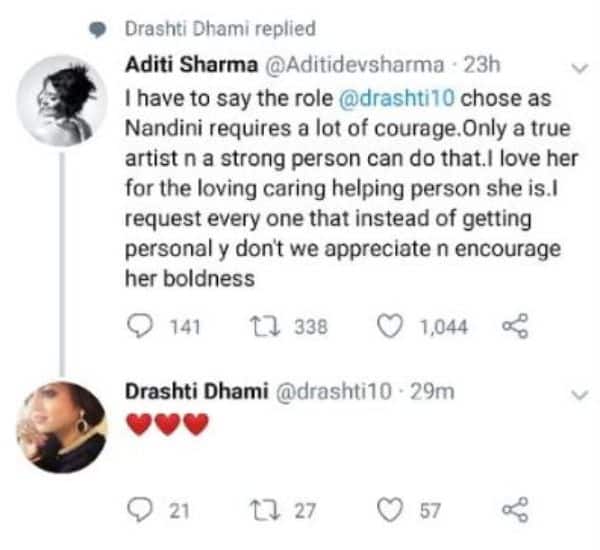 A few days back, Shakti Arora also got trolled but he gave it back to them in his own style. Despite all these hate messages, all the actors deserve all the praise for playing the roles remarkably.