For the longest time people thought there's something brewing between Priyanka Chopra and famous American pop singer Nick Jonas after they arrived hand in hand at MET Gala last year. Their pictures were all over the internet with everyone gossiping about this hot new couple in town. So much that even Jimmy Kimmel didn't spare PC when she appeared on his show soon after as he trolled her by asking questions like - "What’s going on? Are you dating Nick Jonas? Isn’t he like 11 years old?” Priyanka obviously couldn't clarify much but just laugh it off by saying, "We were both wearing Ralph Lauren and so we decided to go together. It was fun. I didn’t ask his age. What it is? 11?" A few days later, Nick too expressed his desire to visit India and confessed how his "new friend" Priyanka recommended him a lot of new places in India, when they met. Also read: ‘Are you dating Nick Jonas?’ Jimmy Kimmel asked Priyanka Chopra and here’s what happened next – watch video Also Read - When Deepika Padukone spoke up openly about Ranbir Kapoor's infidelity, called herself 'foolish' for trusting him

Cut to Feb 2018, we now find Nick eyeing Deepika Padukone. Yes, we were scrolling down our Insta feed when we found Nick commenting with a cutesy smiley on Deepika's latest post on Insta. Like, had he been commenting frequently on Deepika's pictures then we wouldn't have reacted this way but considering this is the first time he's reacted to Deepika's pic does raise our eyebrows. Here, check out the comment for yourselves below: Also Read - Salman Khan–Katrina Kaif’s Tiger 3 to release in theatres before Shah Rukh Khan–Deepika Padukone’s Pathan? [Exclusive]

adorable(& not so little)on set buddy! 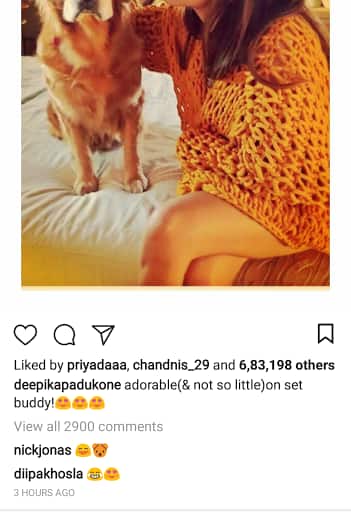