AIB Knockout: Why have the AIB boys sworn a vow of silence?

I was just going through all of their Twitter handles individually and the generally frequent Twitter users haven't tweeted a single thing since yesterday, except for one picture...

As you all might already know (and those who don't, good time to crawl out of your caves) all hell has broken loose since the All India Bakchod team released their very special and India's first ever celebrity roast session AIB Knockout with Arjun Kapoor and Ranveer Singh on YouTube. Now I know that having the first ever celerity roast is no Mangalyan for India but it certainly is a new feat for the Indian comedy scene in general, something the unfunny cartoons *cough MNS* sitting at influential positions could not understand. So out they came... sorry, outraged they came and called for a ban on the show (because it was against Bharatiya culture, duh!) and even called for putting the AIB dudes behind bars (because they are great substitutes for all the ACTUAL criminals and offenders!) While this circus was happening, Ashoke Pandit, a Censor Board member decided to say something ridiculously disgusting about Karan Johar's sexual preferences. Here is his tweet Also Read - After Munmun Dutta, comedian Abish Mathew faces ire on social media for 8-year-old tweet mocking Mayawati

An obviously pissed off KJo tweeted, "Not your cup of tea, don't drink it!" With that the haters were schooled in the lesson of 'choice'. I was expecting the AIB guys to react to all that was happening around the roast like Karan did. Thinking that I might have missed their reactions on my Twitter feed I went on each of their Twitter profiles individually only to find a lull, kind of a strange silence. Also Read - BL Awards 2020: Tanmay Bhat, Zakir Khan, Sumukhi Suresh, Abish Mathew, Anu Menon – who is the most popular comedian? – vote now 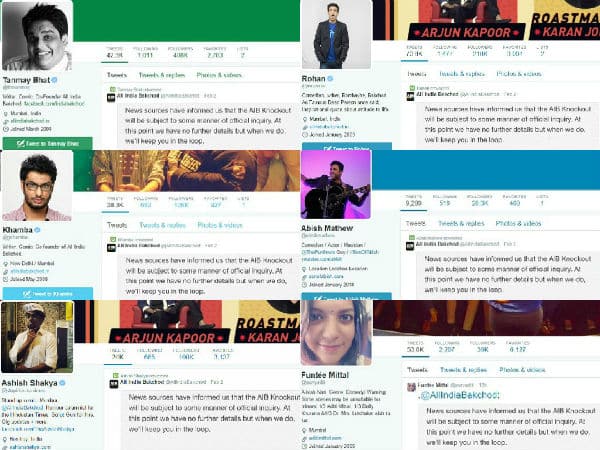 None, and I repeat NONE of the AIB people tweeted about any of the controversies or moral policing that was happening to their roast! And these people are fairly generous with their opinions on current issues! Then why are they silent now? Why have none of the All India Bakchod members said anything about how their first attempt at celebrity roasting is being ripped apart by holier-than-thou political parties who have double standards higher than Burj Khalifa?

Well, I have no answer to that question. All I have is this one common picture that each and everyone of the AIB member has tweeted on their accounts, before swearing the 1 day-long vow of silence. Here is that picture.

We just hope that the super-talented comedians keep us in the loop about what they will do next and bounce back like they always do!