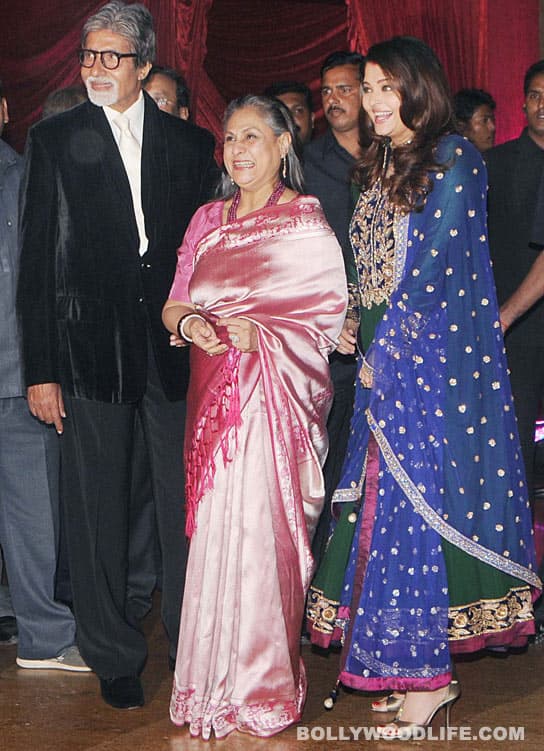 While Abhishek attended the couple’s wedding, the new mom accompanied her parents-in-law to the reception

The wedding reception of Riteish Deshmukh and Genelia D’souza was attended by the who’s who of B-town, but the one guest we were glad to see was Aishwarya Rai Bachchan. The new mom looked gorgeous in her blue-and-green churidar kurta. All you Ash fans will definitely agree that we’ve not seen much of her since we found out about her pregnancy. She hardly ever stepped out in public, except for Sanjay Dutt’s Mata Ki Chowki, where she covered her baby bump with a red puja cloth, and to various Durga pujas, where she wore enveloping flowing garments. After the baby was born in mid-November, she attended a press conference organised by husband Abhishek and father-in-law Amitabh. She looked tired (delivering your child by the natural process does take its toll) but glowing in her pale pink anarkali. Just when we thought we would see more of her, she opted to retreat indoors again. Only now, three months later, has she finally stepped out and that too for such a grand event. Also Read - Aishwarya Rai’s baby Aaradhya’s face revealed!

Not having seen her in a long time, we assumed she would be busy getting back in shape; especially since it had been reported that she would be ready to start shooting again from January for the oh-so-gossiped-about Heroine (when she was still a part of the project). However, after taking a look at her photos from the event, that doesn’t seem to be the case at all. Looks like Ash prefers to keep herself busy bonding with her daughter, changing nappies and bathing the infant rather than thinking about anything else. No wonder then that despite not having attained her pre-pregnancy shape, she is radiating happiness. We also love her bond with her mother-in-law Jaya - so obvious from the photograph. It sure helps to have supportive in-laws. All you women out there, don’t you agree? Also Read - Abhishek Bachchan confirms Beti B’s name is Aaradhya