Ajay Devgn's Shivaay Trailer: In case you missed the Shiva connection - here it is!

Ajay Devgn might have dismissed Shivaay's connection with Lord Shiva but here we found one!

At the launch of Shivaay's trailer at Indore today, when Ajay Devgn was asked if Shivaay is on the lines of religion like Aamir Khan's PK and Akshay Kumar's OMG, he said "I am portraying Shiva, there is no religion in the film. He only has a tattoo and his name is shiva." Also Read - Veteran filmmaker Rahul Rawail's son, Shiv, secures another biggie with YRF; will work with a star son in their OTT foray

But, there was something in the teaser that caught our eye which compelled us to draw parallels between on-screen Shiva and off-screen Shiva. It was this scene where Ajay is shown lying on the snow bare body with his tattoo and chillam in focus. Chillam aka smoking pipe is something Lord Shiva and devotees of shiva are often associated with. Also Read - Akshay Kumar, Aamir Khan, Ranveer Singh and more: Here are the release dates of the upcoming biggies of these Bollywood superstars

Missed the scene, check it out here - Also Read - Sooryavanshi: Akshay Kumar-Rohit Shetty-Katrina Kaif's film to RELEASE on THIS date; will also mark reopening of theatres in Maharashtra 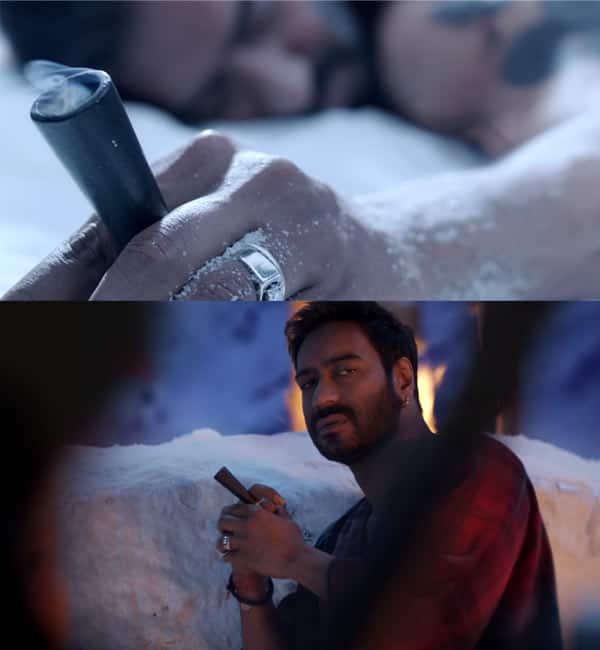 Tell us what do you think about the Shiva connection in the comment box below!

Shivaay, probably the most ambitious project of Ajay's life, has been associated with the Hindu God several times since its inception. First it was being said that it's an adaption of noted writer Amish Tripathi's bestseller book 'Immortals of Meluha' which was soon rejected. Then it again made headlines when it got into trouble for allegedly hurting religious sentiments. It seems the comparison between the two is inevitable!

Speaking at the launch of the trailer in Indore, Ajay said "...I am bored of mediocre films so someone has to raise the bars.. For this film I haven't taken any films since past two years coz this needed such amount of passion.. If you have to do such films you have to sacrifice." Going by the trailer we can safely say that the film will be anything but mediocre.

For those who still haven't watched the trailer, go watch it now! Here is the link -