Akshay Kumar and Twinkle Khanna feel blessed to have a son like Aarav....

It's always special to receive an appreciation from your parents and what better than winning their hearts on a day as special as Father's day? Akshay Kumar's son Aarav seems to be that ideal son as he won the title of being the 'Best Son In The World' on this Father's day. Yes, while everyone was busy sharing their fathers' photos with adorable captions. Akshay took to Instagram and posted a ridiculously cute pic with Aarav saying, "Every day is a #FathersDay if you have a son like that :) #MakingMemories #blessed." In fact, mommy Twinkle Khanna too didn't hesitate from declaring Aarav as the "Best Son In The World" as she commented on this very picture with all her heart. Aww, such a blessed, happy family! Now if this doesn't sum up Aarav's goodness then I dunno what will. Also read: Akshay Kumar's son Aarav Bhatia is just 14 and already taller than him - view pics Also Read - Did you know Queen Kangana Ranaut REJECTED these Bollywood films starring Salman Khan, Akshay Kumar, Ranbir Kapoor and more? Here's why

Akshay and Twinkle are hands on parents when it comes to their kids. In fact, at an age when star kids are prepping up to venture into Bollywood. Aarav is rather invested in self defense and martial arts. Remember he had also won a black belt in Kudo? Talking about the same, Akshay had once said, "I never groomed him. Children always think parents don’t know anything. They like learning from someone else. I myself can teach him and give him the black belt. But it’s always better to have someone else doing that. He tells me, ‘Daddy you don’t know anything’. Also Read - Amitabh Bachchan, Shah Rukh Khan, Ranbir Kapoor and more celebs who turned into unrecognisable characters using prosthetics 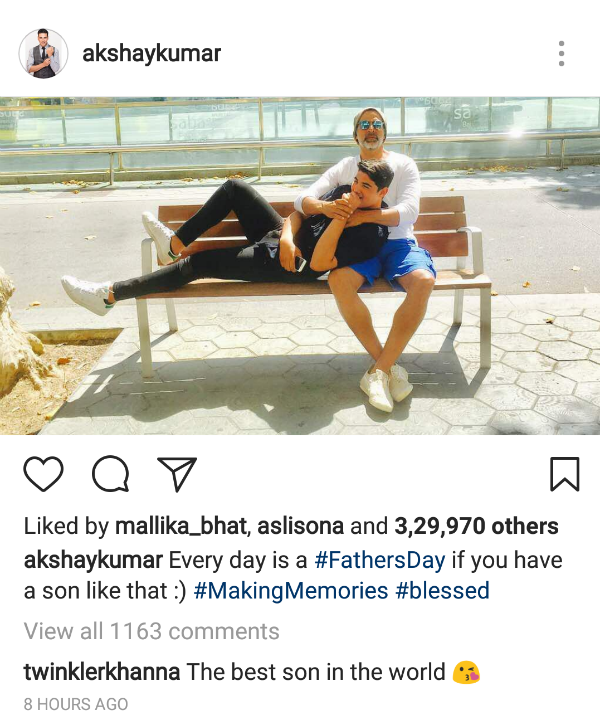 Akshay wants to be a protective father but equally also wants to make his son to be independent of his own choices as he had quoted, "I hope he does because this industry is great. It’s a very welcoming industry and it’s given food and shelter to me and my family for years now. But I will just tell him one thing that he will have to make his own mark. I am there to guide him, help him but he has to do everything here on his own. But that’s thinking too far. He is a teenager. Let him finish his studies."

The last time we had spotted Aarav in public was when he had stepped out with his bunch of friends for a movie date. How fond are you of Aarav? Tell us in the comments below and keep watching this space for more updates.