Akshay Kumar, the most 'patriotic' actor in the country, is NOT eligible to vote in India?

Akshay Kumar is technically a Canadian, and this is not us saying. It's Wikipedia!

If there is a poll on the most patriotic actor in Bollywood right now, Akshay Kumar would win it hands down. From his movies to his social networking activity, the star of many superhits is consistently promoting his deshbhakt sentiments everywhere, and we are glad to see an actor who is so proud of his nationalism. When it comes to Bollywood, nearly every recent movie of his has a patriotic stance, except for Housefull franchise (Thank God for that! I love my country too much to make Housefull franchise make a mockery out of it!). Why, even his upcoming movie Jolly LLB 2 has Akshay Kumar hollering in the court, about kuch toh lihaaj karo desh ka, whereas the original Jolly LLB was more about justice for all, rather than getting into patriotic sentimentality. Even his future movies, Gold and Crack, have that unmistakeable patriotic sentimentality. In short, Akshay Kumar is becoming our generation’s Manoj Kumar. Also Read - Kriti Sanon lambasts 'insensitive' videos of paparazzi covering Dilip Kumar's funeral; says, ‘They were talking so badly, laughing about not getting the angle’

Now if Manoj Kumar had a social networking site, even I am not sure if he would have not been as vocal about various pressing issues that affect our country’s integrity as Akshay Kumar is on Twitter. From his scathing comments on Uri attacks to his latest video about an initiative he had about for the welfare of our slain braveheart soldiers’ kin, the man just takes in nationalism in every breath of his… Also Read - Will Sooryavanshi actor Mrunal Jain follow sister Rashami Desai's footsteps and enter Bigg Boss? Here's what he has to say [EXCLUSIVE]

Here I am standing up AGAIN for something I truly believe in coz THEIR well-being MATTERS to ME.I'd love to know if it does to YOU as well? pic.twitter.com/3Y5NPmTJhg

So it was a strange revelation for me to find this weird anomaly on his Wikipedia page, when I went looking for some info about one of his movies... Also Read - Kargil Vijay Divas: From Shah Rukh Khan in Main Hoon Na to Vicky Kaushal in Uri, 10 actors who looked simply dashing in Army uniforms

So why is Wikipedia calling the most patriotic actor of our times a Canadian? Then I remembered how one time he was detained at the Heathrow airport because of the complications with his papers. That incident also revealed that he holds a Canadian passport, which now made me realise that technically Akshay Kumar is not an Indian... he is a Canadian.

There might be an argument over the fact that Akshay Kumar can hold dual citizenship. Canadian laws do allow that for sure, but unfortunately, our Indian legislation does not. Here is a section in the immigration helpdesk site of India, Immihelp.com that clearly states this... 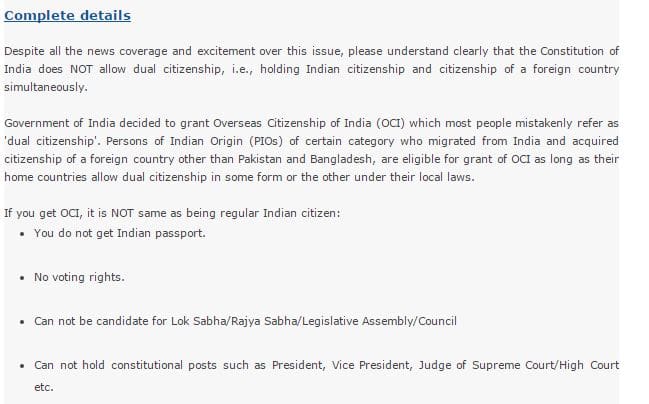 Yup, since Akshay Kumar holds a Canadian passport, he can't even vote in India. Because after taking up Canadian passport he has ceased to be an Indian citizen. According to Section 9 of the Citizenship Act, 1955 , any citizen of India, who by registration, naturalisation or otherwise voluntarily takes the citizenship of another country, shall upon such acquisition cease to be a citizen of India. Cases of termination or cessation of citizenship will be determined ultimately by courts of law.

And even if you search in Google, you won't find any pic of Akshay Kumar going to cast his vote anywhere.

But then trifle things like holding an Indian passport should not stand in the way of showing love to your country, what say Akshay Kumar fans? Although we do wonder how all these right wing parties would react if they found out that Aamir Khan or Shah Rukh Khan held passports of other countries instead of Akshay Kumar.

When contacted, a source close to the actor mentioned, "Akshay has got a honorary passport from the Canadian government, it does not mean that he has given up on his Indian citizenship. As far as his voting is concerned his ID card might be from Delhi and the reason he's not spotted at voting booths is also because he's mostly out of the country on shoots during those times."

However, Canada offers 'honorary' citizenship to only select few, that the entire parliament of theirs has approved, and this was only conferred to only six individuals before, including Malala Yousufzai and the late Nelson Mandela. Here's what Wikipedia has to say about this...

We do wonder what to make of this...