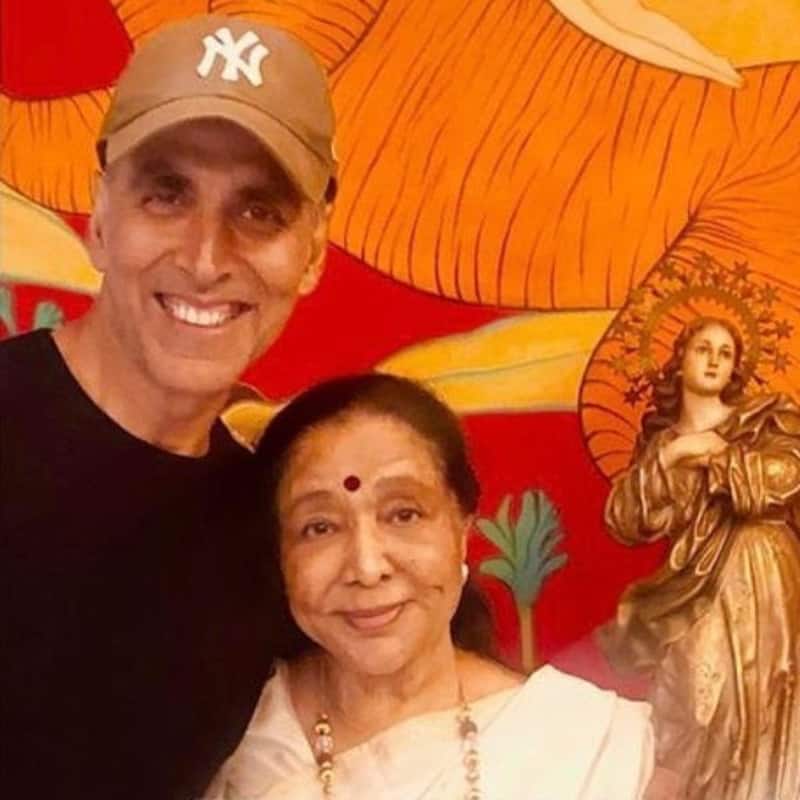 Akshay Kumar keeps making headlines for various things, mostly positive ones. The last his name flashed was in relation to the Hindi remake of the Tamil horror-comedy Kanchana. The news of director Raghava Lawrence having walked out of the Hindi remake titled Laxmmi Bomb did the rounds and Akshay being the lead actor in it had a mention in the whole issue. However, the makers seem to be sorting that out as the director issued another statement saying he was reconsidering his decision as the makers were going to have a meeting with him. Anyway, now Akshay has come back with another news. But this one is a heartwarming one. He met up with legendary singer Asha Bhosle today and posted a picture with her on his Instagram account. He wrote the caption, "It was so lovely meeting the wonderful @asha.bhosleji today. Chai and some fun chatter made for a perfect Sunday evening!" Also Read - Prakash Raj brutally trolls Akshay Kumar for his Chhatrapati Shivaji Maharaj look and 'electric bulb' goof-up

Have a look at his post here: Also Read - Ranveer Singh-Deepika Padukone, Shah Rukh Khan and more celebs who own the MOST expensive homes; check insane costs

It was so lovely meeting the wonderful @asha.bhosle ji today. Chai and some fun chatter made for a perfect Sunday evening!

The picture is super cute with Akshay flashing a big smile, just like a kid and Asha ji showing off her dimples even in this age. The picture also features Mother Mary in the background. But we are not sure if it's a statue or a painting. The star who was last seen in Kesari met with her this evening and we wonder if some magical collaboration is in the making. What a lovely treat that would be! Also Read - Hera Pheri 3: Anees Bazmee is clueless if Akshay Kumar or Kartik Aaryan will be the part of the film; here’s why

On the work front, Akshay will next be seen in Good News with Kareena Kappor, Kiara Advani and Diljit Dosanjh, and in Housefull 4 with the ensemble cast of Kriti Kharbanda, Kriti Sanon, Pooja Hegde, Rana Daggubati, Bobby Deol, Riteish Deshmukh and Chunky Panday among others. He will also be seen in Rohit Shetty's Sooryavanshi with Katrina Kaif.

Stay tuned to BollywoodLife for more scoops and updates from the world of entertainment.