Alia Bhatt and Sidharth Malhotra have a HUGE fight over the actor's closeness to Jacqueline Fernandez?

It's trouble in paradise for Alia Bhatt and Sidharth Malhotra courtesy Jacqueline Fernandez? 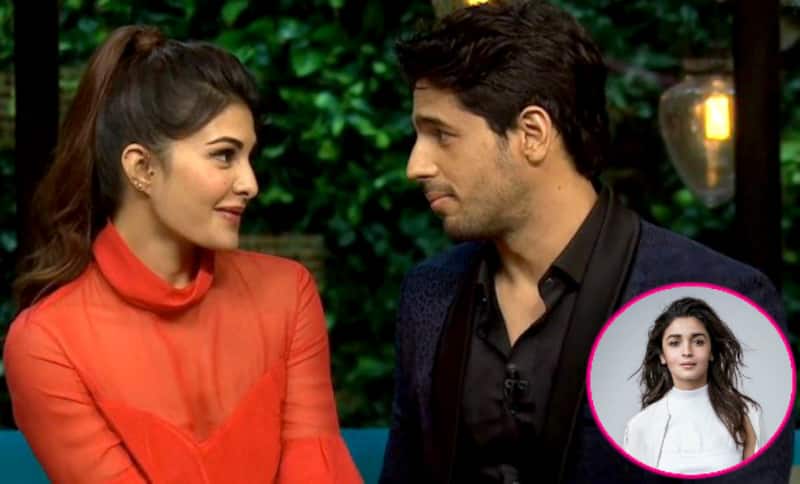 Alia Bhatt and Sidharth Malhotra have been extremely close to each other ever since they debuted together in Student of the Year. Though they have denied it time and again, the duo are reportedly dating each other and are quite serious too. However, seems like there is some trouble in paradise. It's not because of a difference of opinion or a fight, but Sidharth's apparent closeness to his Reload co-star, Jacqueline Fernandez. In fact, reports suggest that this has miffed Alia so much that she had a huge fight with Sid quite recently. Also Read - Koffee With Karan 7: Vicky Kaushal-Sidharth Malhotra, Aamir Khan-Kareena Kapoor and more – which was the least entertaining episode so far? VOTE NOW

According to a report in Mid-Day, Jacqueline Fernandez and Sidharth Malhotra have continued to remain very friendly even though they have wrapped up their upcoming film - Reload a long time back. The tabloid also mentioned that the sizzling onscreen jodi keeps meeting for coffee and drinks, but this has not gone down well with Sid's rumoured girlfriend, Alia. A source even revealed to the tabloid that the rumoured couple had a huge fight over Sid's closeness to Jacqueline. The situation worsened when they called off an exotic vacation that they had been planning for a few months now. We just hope the adorable couple sort out this lover's tiff soon. (ALSO READ - We wonder what Alia Bhatt has to say about Jacqueline Fernandez wanting to give Sidharth Malhotra babies? Watch video) Also Read - Trending South News Today: Vijay Deverakonda opens up on his equation with Karan Johar, Ponniyin Selvan’s new single Chola Chola impresses fans and more

Earlier this year, Karan Johar had even asked Jacqueline Fernandez and Sidharth Malhotra about their closeness on Koffee with Karan season 5. KJo made suggestions that the two were seeing each other, however both the actors denied it and suggested that they were just close friends. But their sizzling chemistry on the show did set some tongues wagging. (ALSO READ - Alia Bhatt meets Sidharth Malhotra's parents, courtesy Karan Johar! What's cooking?) Also Read - Liger star Vijay Deverakonda is TIRED of restless promotions; talks about taking a proper break and his next with Samantha Ruth Prabhu

On the professional front, Sidharth is currently working on the Ittefaq remake and Aiyaary. Reports suggest that he will also be romancing Alia in Aashiqui 3 after the actress wraps up Dragon and Gully Boy. Jacqueline, on the other hand, will reportedly star opposite Salman Khan in ABCD 3.