Alia is quite fond of Bebo..

Bebo of B-town has turned 38 today and wishes have started pouring in from the who's who of Bollywood and her fans. Kareena's birthday celebrations began last night itself as her hubby Saif Ali Khan had arranged for an intimate birthday bash for his ladylove. Present to ring in her birthday, were parents Randhir and Babita, sister Karisma Kapoor, Soha Ali Khan and Kunal Kemmu, among other family members. It was a starry affair and the pictures of the same shared by Karisma and Soha proved that Bebo enjoyed the surprised to the core with all fun and galore. Besides her fam-jam who kick started her big day on a dhamakedar note, Alia Bhatt, who is smitten by Kareena, too had the sweetest wish for her 'favourite'. 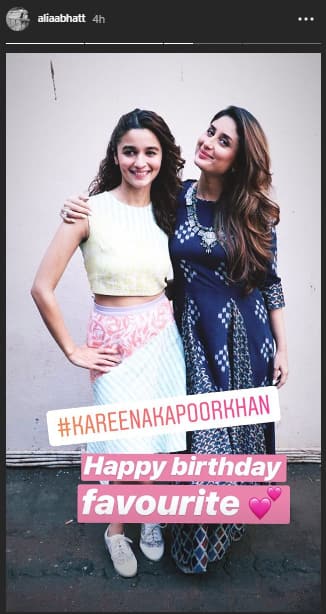 Alia has been fond of Kareena and has confessed the same for her publicaly. In fact, Kareena is equally in awe of her and has praised Alia many a times. The Student Of The Year actress has been compared to her idol and has always stated that she carries a different aura altogether. Earlier in an interview, Alia had said, "Honestly speaking, I am not even trying to compete with Kareena because that would be stupid with me. She is in a different league of acting, stardom and talent altogether. I am still learning and very new to this field. For me it's a very big thing that I am starring in the same film with her. Even if she is overshadowing me, then I don't think all that really matters. Each character in the film is different. Over that, the job is not to overshadow but to play your part to the fullest and I am sure that Kareena has done far superior job than I could have ever done and I say that from my heart."