[All pics and videos] While Priyanka Chopra admires LA, Nick Jonas is busy getting 'sweaty'

Here's an update from our newest couple Nick Jonas and Priyanka Chopra.

Here's an update from our newest couple Nick Jonas and Priyanka Chopra. You are aware that our desi girl in presently in the US. When she is not working, she spends dinners and brunches with her fiancé Nick Jonas. But when they are not together what do they do? Well, PC admires LA's many treats while Jonas gets some workout done. Both of them have been posting about their daily routine on social media platforms and we are glad that they are doing so. The only time we get to see them is when they make appearances together. It's nice to see what all they are upto in the US. Check out their updates here... 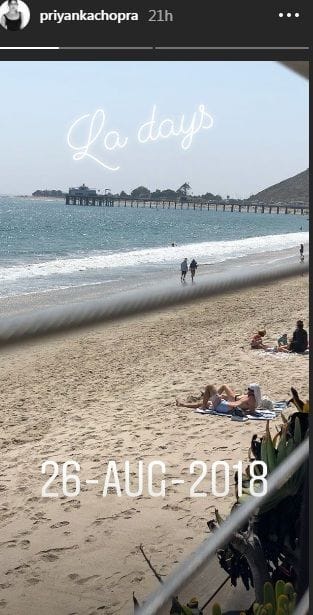 Also Read - Nick Jonas is 'Missing his heart' Priyanka Chopra; shares the most romantic picture ever

As per a Mumbai Mirror report, Priyanka and Nick are supposed to attend a wedding in Italy. A source told the daily, “Priyanka completed the first schedule of Shonali Bose’s The Sky is Pink with Farhan Akhtar and Zaira Wasim earlier last week and will now only join them again towards the end of September. She had stayed back to complete some prior commitments and spend time with her family before heading to the US, a trip that was planned well in advance. During the month-long trip, the actress will also be attending a wedding in Italy with Nick, the bride reportedly being the daughter of a corporate bigwig.”