Sushant Singh Rajput fans have been trending hashtags related to SSR almost every single day since his death and this immense love from fans has moved Aly Goni.

It's been almost a year since Sushant Singh Rajput left for his heavenly abode. The Chhichhore actor was found from the ceiling in his Banda apartment on June 14, last year. Since then, his fans have been seeking justice for SSR and demanding reinvestigations from the authorities. They have been trending hashtags related to Sushant almost every single day and this immense love from fans has moved Aly Goni. Also Read - From Rahul Vaidya-Disha Parmar to Rohanpreet Singh-Neha Kakkar: These TV couples got TROLLED for their PDA moments at the airport

The former Bigg Boss 14 contestant came across a hashtag 'Trusting CBI Chief 4 SSR' on Twitter after Subodh Kumar Jaiswal was recently appointed as the new CBI chief. Aly was overwhelmed to see the love of fans. He shared the screenshot of the hashtag on Instagram and wrote, "Ye kamaya hai Sushant ne. It's been almost a year since SSR died, but there is not a single day passed when his fans didn't trend him on Twitter.” Also Read - Kangana Ranaut, Rhea Chakraborty, Yami Gautam and more – check out the list of celebs who were trolled this week 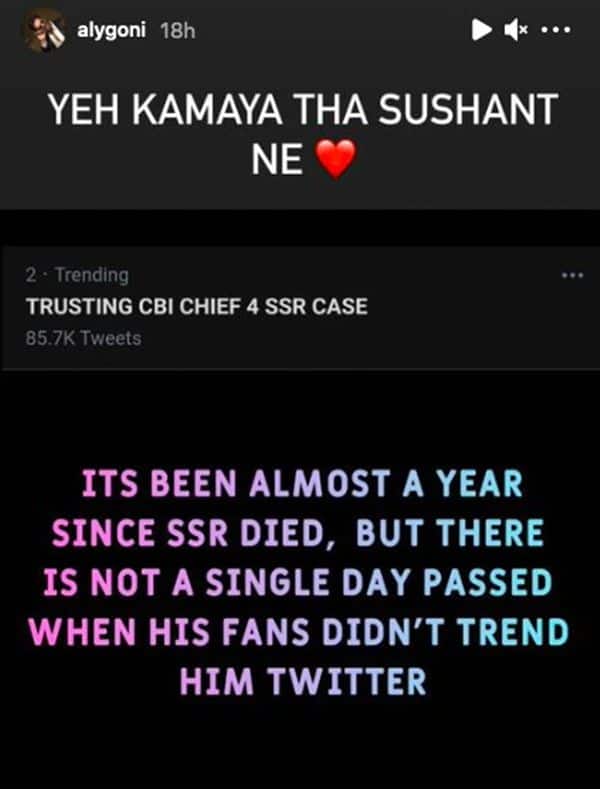 Also Read - Sidharth Shukla becomes the 'Most Desirable Man on TV' for second time in a row; beats Parth Samthaan, Asim Riaz, Aly Goni and others

Meanwhile, a Mumbai court on Friday sent Sushant Singh Rajput's former flatmate Siddharth Pithani, arrested in Hyderabad and brought in Mumbai, to the custody of the Narcotics Control Bureau till June 1 in connection with a drug case linked with the death of the Bollywood actor last year. Among the prime suspects in the case, Pithani was absconding since long, but was arrested by the NCB in a joint operation with its Hyderabad office on Wednesday, May 26.

After getting a transit warrant from a Hyderabad court, Pithani was brought to Mumbai and produced before the Chief Metropolitan Magistrate at the Esplanade Court this afternoon, and it sent him to NCB remand for four days.

Seeking his remand, the NCB lawyer said that it wanted to probe his role and nexus with others accused in illicit drug trafficking rackets and details of his links with contraband dealers to unearth the full truth and ensure justice is done.

The other co-accused in the same case, Samuel Miranda and Dipesh Sawant, had spilled the beans on Pithani in their statements, claiming he was in direct with not only Rajput, but also with actress Rhea Chakraborty and her brother Showik Chakraborty, who were also arrested in the case last year.

Pithani's arrest came nearly 3 months after the NCB filed a charge sheet in the Sushant case before a Mumbai special court on March 5, naming 33 persons including the Chakraborty siblings and many others.

A former flat-mate of Sushant, Pithani was among the earliest persons who had seen the actor's body found hanging in his Bandra apartment on June 14, 2020, as the death sparked off a nationwide political furore. Pithani, who failed to honour previous summonses by the NCB, has been booked under various sections of the Narcotic Drugs and Psychotropic Substance Act.