Amal was the best dressed at the Royal Wedding, say fans The Royal Wedding of Meghan Markle and Prince Harry was a hot topic of discussion all over the globe this weekend. Many celebrities were invited for the do and they all looked beautiful in the ensembles that they chose. Especially the ladies were the epitome of elegance. Amal Clooney was the best-dressed guest at the Royal Wedding, until Priyanka Chopra arrived at the venue. While Amal, who is a human rights lawyer, wore a beautiful yellow dress with a matching hat, Priyanka slipped into a lavender dress with a matching fascinator. Amal’s mustard yellow shift dress, which was designed by Stella McCartney, featured a long floor-length sash. Metallic heels and box clutch bag completed her look. She arrived with her husband, George Clooney, who wore a grey suit and pale yellow tie. Also Read - Kiara Advani's tribute to Sidharth Malhotra's dog to Katrina Kaif's messenger doves: Bollywood divas make a statement with customised choodas and kaliras

Priyanka wore a custom Vivienne Westwood lavender dress and a fascinator of the same colour. The latter has been designed by the iconic British fascinator designer Philip Treacy. Priyanka teamed her outfit with burgundy lip and bejewelled heels. She arrived with Abigail Spencer. It was getting difficult for us to decide who is better between Amal and Priyanka, hence we asked you, our readers, to tell us your pick between Priyanka and Amal. And well, here are the results. Amal has won the poll by getting 59 per cent of votes. But then it was a tough call for all of you. Clearly Amal's mustard yellow dress was a winner at the Royal Wedding: Also Read - Priyanka Chopra, Nick Jonas share unseen photos from their winter vacay with Malti Marie 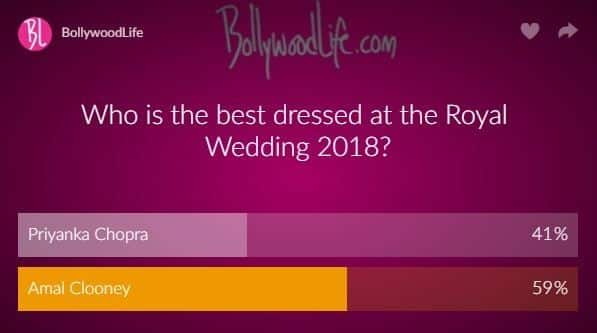 The couple is due to attend a Buckingham Palace garden party on Tuesday as part of the Prince of Wales's 70th birthday celebrations and we can't wait to see what she wears there.