The US embassy presented Amitabh Bachchan with an award for his fight against Tuberculosis...

Amitabh Bachchan was given an award by the US Embassy in appreciation for his invaluable contributions to the US-India partnership on tuberculosis, an official revealed. The award was presented to the legendary actor on January 8 by the US Ambassador to India Richard R. Verma. Verma, who is also a tuberculosis survivor, was also the brand ambassador for the initiative. Also Read - Chunky Panday opens up on the startling similarities between his OTT short film Tap Tap and his career; says, 'I had no work after giving India's biggest hit, Aankhen' [EXCLUSIVE]

Speaking on a live video-chat with Facebook users, the two discussed the US Embassy's collaboration to end tuberculosis in India and the US-India partnership among other issues. Verma acknowledged, "I thank Mr. Bachchan for his dedication to support the cause and for sharing his story as a tuberculosis survivor to reduce the stigma associated with tuberculosis." He added that more lives can be saved and ease the burden of the disease on family members, communities, corporations and India, referring to the high incidence of tuberculosis-related deaths in the country. ALSO READ - Amitabh Bachchan's Pink leads IMDB's list of 2016’s top Indian films while Alia Bhatt's three movies make it to the top five Also Read - BREAKING! Director Rakeysh Omprakash Mehra opens up on his next with Farhan Akhtar; says, 'Will put Bhaag Milkha Bhaag and Toofan together' [EXCLUSIVE]

Amitabh reciprocated by saying, "It is inspiring that India and the US are natural partners with a long history of collaboration on tuberculosis prevention, treatment, research and cure and I hope to continue to do my bit in this partnership to end tuberculosis in India." ALSO READ - Amitabh Bachchan's Pink is the movie India needed the most in the year 2016, here's why Also Read - Throwback: When Tiger Shroff spoke about the ‘worst’ phase of his life and revealed he had to sleep on the floor 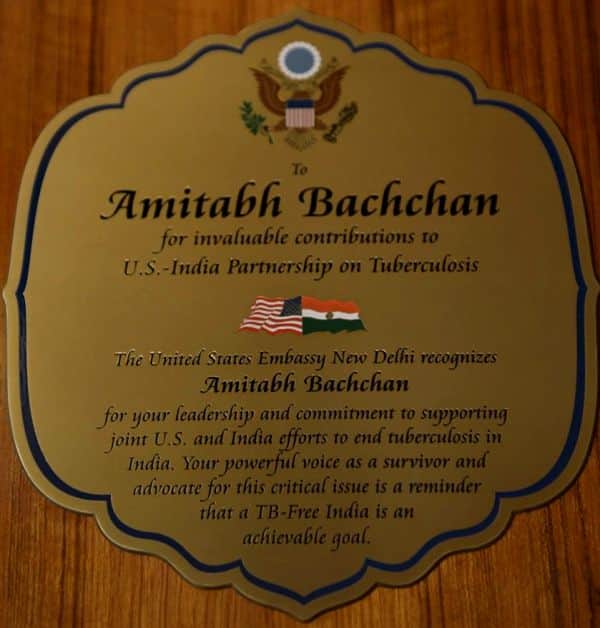 Verma and Amitabh first collaborated to work on tuberculosis during an event here two years ago on September 10 and it soon grew into a common passion around the cause of eradicating tuberculosis. In March 2016, Amitabh attended a reception at the US Embassy in New Delhi as the brand ambassador and a survivor of the disease.