Amy Jackson is oozing hotness in her latest pregnancy pictures

The pregnancy glow is so evident on her face and we cannot wait to hear the good news. While we wait for it, check out Amy's new set of pregnancy pictures inside...

Amy Jackson is expecting her first child with fiance George Panayiotou and the actress is happily flaunting her baby bump. Although she is 26 weeks pregnant, the Ek Deewana Tha star is practising to be in the best shape. On International Yoga Day (June 21), Amy shared an image from her post yoga session and captioned it as, "Game Face... The battle I have every morning about whether I should go to the gym or eat a bowl of honey #cravings #26weekspregnant." Days after that, Amy shared yet another series of her pictures flaunting her baby bump and enjoying by the beach with her man.

The pregnancy glow is also evident on her face and we cannot wait to hear the good news. While we wait for it, check out Amy Jackson's new set of pregnancy pictures below: Also Read - Have Amy Jackson-George Panayiotou parted ways? Actress deletes his pictures from her social media 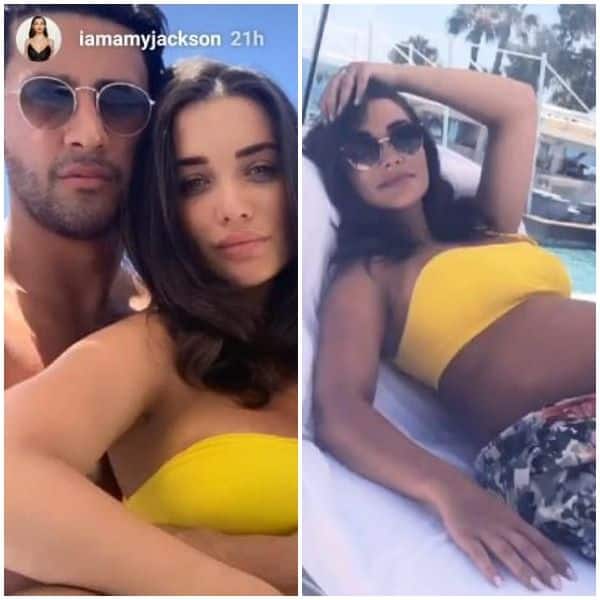 Game Face ??✊? the battle I have every morning about whether I should go to the gym OR eat a bowl of honey #cravings #26weekspregnant | GYM every/ most of the time. @aloyoga always.

Amy Jackson and George got engaged earlier this year. As far as their wedding is concerned, reports suggest that the 2.0 actress will exchange the wedding vows with him in the first half of 2020. A source close to the actress had earlier revealed, "After considering several locations, they decided on Greece because she wanted a beach-side venue for her special day. They are looking at villas near Mykonos Island and will tie the knot as per Christian rituals. Amy fell in love with the beautiful locale when she visited it last year with her husband-to-be."

Word is that Amy will settle in the UK after her marriage, however there is no clarity whether she will host a grand reception for her Bollywood and Kollywood industry friends or not. Talking about her fiance George, he is a multi-millionaire who heads the development and acquisition of The Ability Group. His father Andreas is the founder of The Ability Group and owns a chain of luxury hotels such as Hilton, Park Plaza, Double Tree.

On the professional front, Amy was last seen in 2.0 with Rajinikanth and Akshay Kumar.