The biggest of Bollywood celebrities are in vacay mode. Most of them are enjoying the snow-clad mountains in Switzerland and the others are enjoying the beaches from Goa to Alibaug. The gen-next of Bollywood is doing the latter part. Ananya Panday is partying with Shah Rukh Khan's kids Aryan and Suhana Khan. The three are joined by their big bunch of friends. The party is happening in SRK's Alibaug's farmhouse. Ananya has put up a picture on her Instagram, with her bunch of friends having a fun time on the beach. While sharing the picture, Ananya wrote, "new year, no new friends ? #2020 #family" Also Read - Alia Bhatt shares the perfect selfie with her best boys, Ranbir Kapoor and Ayan Mukerji, from their new year vacation

In the picture we see Ananya dressed in green while Suhana is looking pretty in her black dress. Also Read - While Bollywood holidays in the snow-clad mountains, Samantha and Naga Chaitanya will welcome 2020 in Goa

Not just this, there's another picture that is making the rounds on the social media. In this picture we see the entire clan sitting together in the living room. We for the first time also saw a glimpse of SRK's Alibaug's farmhouse. The interiors of the farmhouse have been done by SRK's wife Gauri Khan. Also Read - Filmfare Awards will not be held in Mumbai, but at THIS venue, next year 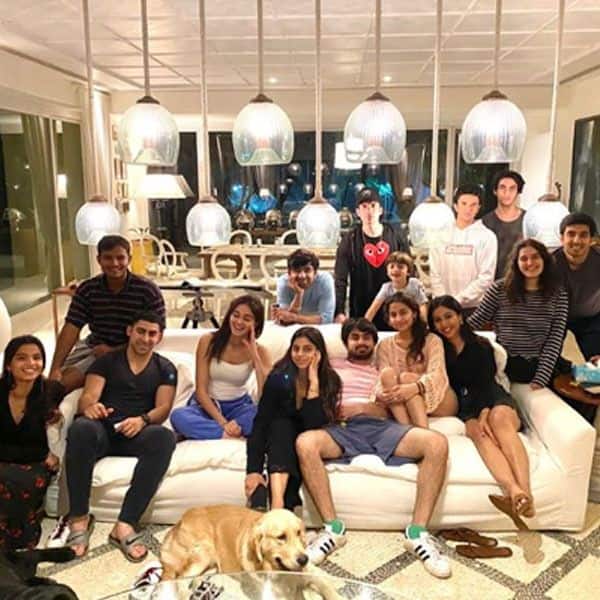 Suhana Khan was recently seen in a short film The Grey Part Of Blue. It was written and directed by Theodore Gimeno and saw Suhana playing a happy romantic young girl. Her big Bollywood debut is still expected. Meanwhile, Ananya Panday was last seen in Mudassar Aziz's directorial Pati Patni Aur Woh opposite Kartik Aaryan. Next, Ananya will be seen in an upcoming comedy-drama Khaali Peeli which stars Ishan Khatter. Ananya has also bagged the prestigious project by Shakun Bhatra. The Dharma Productions' also stars Deepika Padukone and Sidhant Chaturvedi.