Angela Krislinzki hit the headlines a few days back for calling Hrithik Roshan her 'mentor'. While speaking to DNA in a recent interview, she revealed some surprising details about her association with the Greek god of Bollywood, with whom she has shot umpteen number of advertisements in the past. She claimed that when she signed her first South movie, Hrithik personally contacted her to inquire about the makers and gave her a go-ahead. She was scared that she wouldn't be able to make it big in Bollywood because of her 'international looks' but it was Hrithik who reinstated the confidence in her. She further went on to say that the Kaabil actor suggested her to work on her acting skills and Hindi. Also Read - 5 SHOCKING pictures of Angela Krislinzki who claimed Hrithik Roshan changed her life

The news caught everyone's attention when Hrithik disowned her claims with a tweet that read, “My dear lady, who are you and why are u lying.” Quick enough to reply, she apologized to the actor on the same platform and clarified that like million other girls she too just has a crush on Hrithik and that the actor has been a great source of inspiration for her. As the actor accepted her 'graceful' apology, people swept the matter under the carpet. Also Read - Hrithik Roshan accepts Angela Krislinzki's 'graceful' apology

But, early today some shocking details about the model-turned actress started doing the rounds on internet. Skeletons were dug out and it was found that she participated in the first season of MTV Splitsvilla with the name Annie Krislinzki. First glance at one of the episodes and we refused to believe that it's the same girl but it was after watching the video on loop that we got convinced that it's her. Quite evidently, Annie, who is half Indian and half Spanish, underwent a drastic transformation post her television stint. Not only did she work on her physical appearance, she even changed her name to Angela. Also Read - Angela Kriskinzki writes a long apology letter to Hrithik Roshan after he tweets 'Who are you' 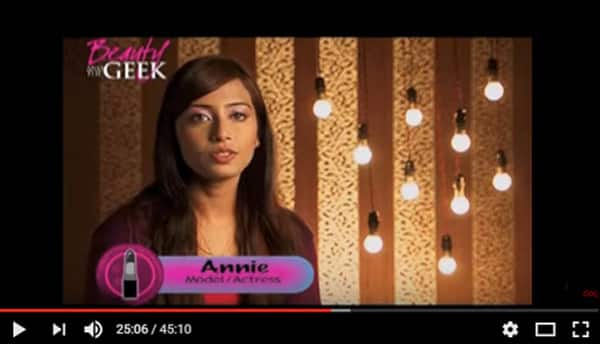 Changing names and having 'transformations' is not unusual in showbiz but it was this statement that got us suspicious: 'He asked me to work on my acting skills and Hindi diction'. Did she imply that her Hindi is not good? Well it clearly doesn't seem so in these videos. Have a look for yourself -

She can speak Punjabi too

My brother recorded a video 4 my bestie on her birthday... finally i found the perfect match for you @preetpal7 Happy birthday love... i know im early but wanted to be the 1st 1 to wish love u... look inspired by my another bestie @sahil_peerzada

So why is she lying? Her Hindi seems perfectly fine to us. Infact her Wikipedia page says that she completed her graduation in Hindi Literature! Not that we are saying that Wikipedia is a reliable source but her videos are proof enough that she doesn't need to 'improve her Hindi diction'.

If she is trying to pass herself off as a foreigner then sorry, we are not ready to buy that. After all we all know now that she didn't have those 'international' looks from birth. What do you have to say about these latest revelations? It's twisted, isn't it?