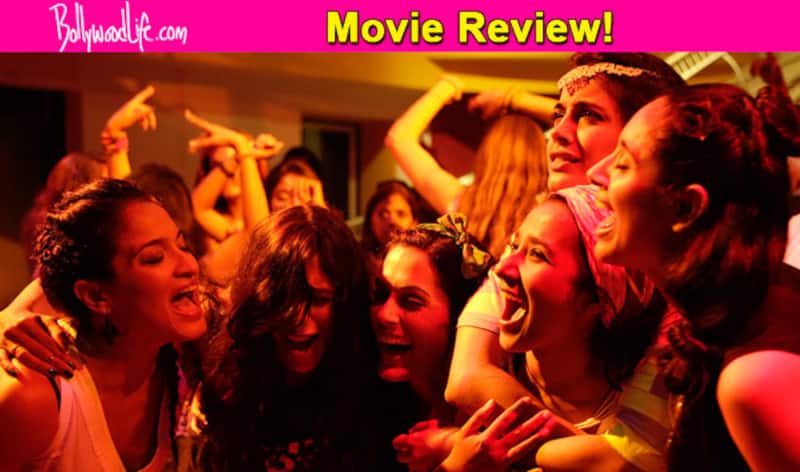 Ever wondered what a world without men would look like? Pan Nalin shows you exactly that...

This film, directed by the American - Indian director Pan Nalin, created ripples with its trailer itself. Just as the Indian cinema has always showcased and regaled in bromance, this film attempts to celebrate womanhood. It takes on the issues which women, especially Indian, grapple on a daily basis and portrays it boldly on a 70 mm screen. Palin has chosen his heroines, or shall we say heroes or better still - sheroes, carefully. They are seven women - enacted gorgeously well by Sandhya Mridul, Tannishtha Chatterjee, Sarah-Jane Dias, Anushka Manchanda, Amrit Maghera and Rajshri Deshpande, who are struggling through their seemingly mundane lives, in a pursuit of happiness and justice! Well, some of us may look at the rushes of the film and dismiss it as another flick giving lessons on feminism, well it is not and here's why every one of you, man or a woman must watch it. Also Read - Sandhya Mridul REVEALS she had to wear breast pads for Page 3, Ragini MMS 2; was told she needs to have 'big b**bs'

There is a spectacular opening sequence which gives us an insight into the lead characters' individual lives. Their characters are introduced in an edgy, gritty manner and it is amazing how the director managed to showcase one emotion common to all his leads: anger, effing anger! Sarah - Jane Dias (Frieda) chucks her high flying photography career and settles in an ancestral, oh-so-gorgeous villa in Goa. She calls her five friends, The tough workoholic mom Sandhya Mridul (Suranjana), the stunning Anglo-Indian aspiring actress Amrit Maghera (Joanna or Jo), the underrated singer Anushka Manchanda (Madhureeta or Mads), the typical Delhi housewife Pavleen Gujral (Pammi), the effervescent activist Tannishtha Chatterjee (Nargis) and of course who would forget the spunky house help Rajashri Deshpande (Lakshmi), to stay with her. Also Read - Never Kiss Your Best Friend 2 review: Nakuul Mehta's effortless performance, Karan Wahi's charm, breezy narration makes it highly watchable

She invites them and springs a surprise on them that she is getting married. The identity of her suitor is revealed only before the interval. Nalin's narrative is beautiful. At times, you just want to throw your head back and relax, reveling in the warm glow that these girls bring alive on the screen, it is almost magical. Have you ever imagined what a world without a man would look like? Well, Nalin shows you exactly that. The first half is crisp and the story telling is tight. It ends on a slightly startling note (no, we won't spoil it for you) and you are left gasping for more. The first half is full of these amazing sequences which portray these women as both saucy and solemn, wild and shackled, liberated and inhibited. The beauty of the scenes like women openly ogling at a well endowed man (and not the otherwise) is so relatable that you can't help but chuckle!

You can't help but applaud Nalin's efforts to go deep in the recesses of a woman's soul. The film will entertain and shock you at the same time as the leads bare their souls in front of us. This is an emotionally driven film which every woman would relate to.

In the second half, the story line starts faltering a bit and the end is extremely predictable. It definitely could have been better without the male bashing cliches. Watch the film and you will certainly agree to this.

Well, the performances and the energy which these gorgeous women bring to the table is INFECTIOUS. Tired of watching reed thin filmy heroines? Them try watching these amazing ladies baring their soul on screen with minimal make up. They look real, brave and sexy: Just like you and me.

This is exactly the kind of film you watch with a girl gang with some beer, preferably. Also, mark for those sequences capturing the rustic, scenic Goan beauty. These women breathe life into their characters and create a rich mosaic which is beautiful, ugly, shocking but simply amazing all at the same time! Watch for the sequence where the feisty Lakshmi attacks a pervert on the road and the way she flicks her glasses and hooks them on the back of her dress, full on Dabangg style!

The film is peppered with these sprightly scenes which are not only heartwarming, but also break so many stereotypes attached with women all in one go. Then, there is a scene where the girls sit at a round table and discuss what it is to be a woman in a man's world. I am sure, every one of us has had this type of discussion with our peers, parents and colleagues when we hear another case of sexual assault on a female!

Well, the second half could have been better. The end is devastatingly predictable and then there are other male bashing cliches. The film post interval lets you down slightly after its spectacular beginning.

Go, watch this film anyway for this is a very unlikely Hindi film coming your way. It is brilliant how the film manages to balance the deep-shit, intense situations with cool-ass, breezy moments! The film is a must watch for men and women alike.