Ranbir Kapoor and Rashamika Mandanna are busy shooting for their film Animal which is being helmed by director Sandeep Reddy Vanga of Arjun Reddy and Kabir Singh fame. Ranbir and Rashmika had jetted off to Manali a couple of days ago where they kickstarted shooting for Animal's schedule. A couple of days later, they returned to Mumbai and ever since Ranbir Kapoor and Rashmika Mandanna have been shooting for Animal in the maximum city. Rashmika took to her Instagram handle a couple of hours ago and shared a picture from her vanity van. It is from the sets of Animal. Also Read - Tejasswi Prakash, Rupali Ganguly, Hina Khan and more – Meet Indian TV’s 7 highest paid actresses

Rashmika Mandanna shared a mirror selfie from the sets as she was getting ready. She is getting her make-up done. But don't miss out on her henna filled hands. Rashmika is getting ready and has Mehendi on her hands. And it is similar to RK's actress-wife Alia Bhatt's Mehendi from her wedding. Well, the styles are actually similar. Coming back to Rashmika's selfie, the Karnataka sensation is seen flashing her cutest smile. "The usual," she captioned the post. Check it out here. Also Read - Trending celeb pics of the day: Helly Shah makes stunning debut at Cannes 2022, Esha Gupta shows off her sexy avatar and more 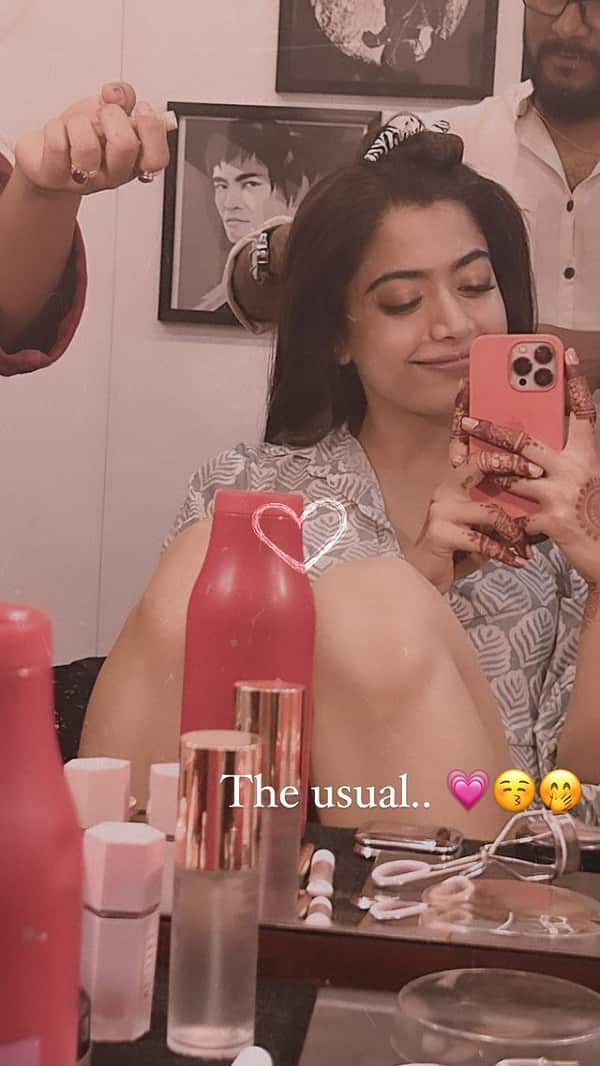 Well, a couple of days ago, a video of Rashmika Mandanna and Ranbir Kapoor from their outdoor schedule in Manali had gone viral. In the video, both Ranbir and Rashmika were seen in traditional attire. Rashmika was in a saree whereas RK was in a kurta and churidar. And with this new Instagram story by Rashmika Mandanna, we wonder what the two are shooting. Is it a wedding track that Ranbir and Rashmika are shooting in Animal? Well, it's all a conjecture for now. However, it does sound interesting. Check out the video that went viral below:

WATCH | Himachal Pradesh: #RanbirKapoor gets captured in Manali as he shoots for ‘#Animal’ with #RashmikaMandanna pic.twitter.com/AV9hf6wPKf

Coming back to Animal, earlier the film was supposed to star Parineeti Chopra. However, she backed out and hence, Rashmika was brought aboard.