Anurag Kashyap, the joke's on you!

We know you are all for anti-yellow journalism, but did you just go too far?

Anurag Kashyap has never really loved the Indian media. Case in point, he was bitter about his widely discussed separation from Kalki Koechlin. He felt jilted after his last film Bombay Velvet was slammed by the critics and media alike. So he decided to get back at the Indian media by conducting an experiment. He Instagrammed a picture of himself with an eye plaster and captioned it as, Also Read - The Family Man 2 actor Manoj Bajpayee picks his favourite web series from Netflix, Amazon Prime, Sony Liv

Now they put a plaster, this is what happens when you get into a brawl with a MMA fighter.

"Now they put a plaster, this is what happens when you get into a brawl with a MMA fighter." Naturally, certain media publications picked it up and published the "news" item with some sensational headlines like these... Also Read - From Priyanka Chopra to Preity Zinta: 5 celebs who have said the meanest things about Kareena Kapoor Khan on Koffee With Karan 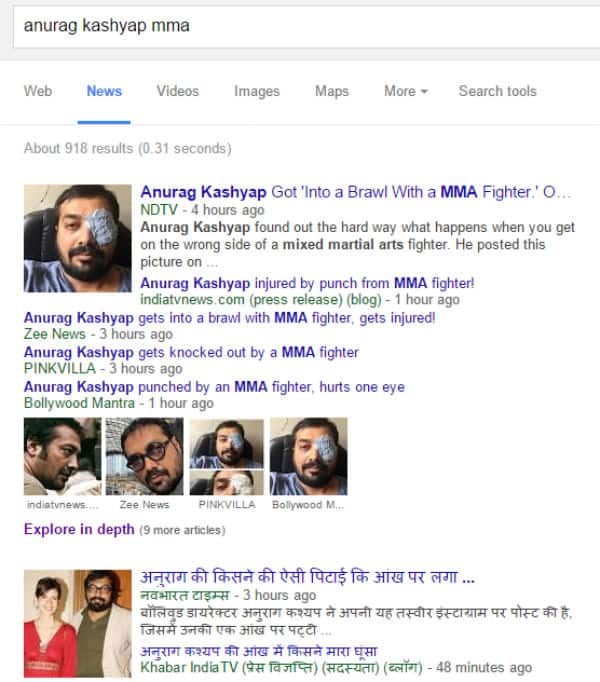 But Kashyap soon posted a 'Gotcha suckers!' message for the Indian media on Twitter and Facebook saying that his Instagram pictures were to prove a point, that Indian media is always in a rush to fill pages with random news without getting its facts right.

one Instagram picture of prosthetics test for the eye, with a random line, becomes news without crosschecking. point proven, won the bet

While I appreciate the experiment and everything, I can't help but see certain things that are problematic about Anurag's social experiment. Let me break it down...

Anurag pelted a stone into the water and had an issue with the ripples. He shared the picture, on his Instagram account saying, "this is what happens when you get into a brawl with a MMA fighter" and the moment some media publications lapped it up he went "HA HA! You're lame" on their asses saying that they didn't crosscheck. Sir, the image was picked up from your verified Instagram page, why would people doubt the authenticity of the information on it? Certain media publications just took his Insta caption as is in their headlines, some obviously went a tad bit too far and wrote crap like, "Anurag Ki Pitaai..." and blah. I get if Anurag has a problem with the latter type of news articles because THAT is yellow journalism.

At best, he should have a problem with certain sections of media lacking a sense of humour because this OBVIOUSLY was a joke because not many celebrities are like Wiz Khalifa who brag about getting into scuffles... or handcuffs.

I have consistently used the phrase "certain sections of media" and not "Indian media" which is a big blunder Anurag committed. In his FB post where he is calling out yellow journalism he says,

The problem with this vociferous claim is that it slots all of Indian media in one category, that of over-sensationalist yellow journalists. Not ALL of Indian media jumps the gun. Certain sections simply reported that Anurag had shared such a picture on Instagram. Only a few media publications went overboard and drew conclusions like Kashyap was beaten up in a brawl. One bad apple doesn't spoil the whole bunch, Anurag. More than the media publications talking about his Insta picture, there were media websites writing about how he was successful in his experiment. What does that say?

When a film releases, directors want media publications to write good reviews. When a film is praised, directors re-tweet and share those articles on social media. When a film needs to be promoted and made to reach out to a wider audience the same media is relied upon. Then why such alacrity to "prove a point" against the forces that have helped build your popularity as a filmmaker, Anurag? The media was harsh to that ONE particular movie you made but it didn't write you off just because you made that ONE Box office dud. I don't know about the rest, but I am still looking forward to your upcoming films.

This experiment wasn't an eye-opener, it just shows that a brand like Anurag Kashyap who is a little wayward and super unorthodox in his film-making and personal life, still seeks some sort of validation by proving asinine points or an egotistical "I WIN!" conclusion to bets and TBH, that makes him a sore winner.