Bollywood actress Anushka Sharma took to Instagram on Monday and shared a new selfie with her husband, cricketer Virat Kohli. The couple posed for a cute bedtime selfie on the eve of their daughter Vamika's first birthday.

Bollywood actress Anushka Sharma took to Instagram on Monday and shared a new selfie with her husband, cricketer Virat Kohli. The couple posed for a cute bedtime selfie on the eve of their daughter Vamika‘s first birthday. In the picture, Anushka and Virat were all cuddled with each other. She was wearing a black sweatshirt, while Virat wore a Team India jacket over his T-shirt. Anushka captioned the selfie as “Who goes to bed at 9:30?”. Well, Anushka, Vamika are currently in South Africa with Virat and the Indian team. Also Read - From Vicky Kaushal-Katrina Kaif to Athiya Shetty-KL Rahul – 10 celebs who never made their relationship official but gave major couple vibes 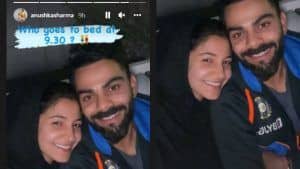 Anushka and Virat's daughter Vamika turns one year old on January 11. Since the time, Vamika has born, the parents have decided to not reveal her face to the public until she is old enough to make her own decisions about social media. Moreover, the couple has even requested the media to refrain from publishing pictures of their daughter. Both Anushka and Virat have shared several pictures of Vamika but did not reveal her face.

On the work front, Anushka Sharma was working during her pregnancy and later took a sabbatical to be with her newborn daughter. The actress recently announced her comeback with the cricket biopic Chakda ‘Xpress which is based on a true story of the Indian women’s cricket team. Anushka will be playing the role of fast bowler Jhulan Goswami in the film.