Who said break up? Anushka and Virat's this recent picture will convince you they are very much TOGETHER!

Anushka Sharma and Virat Kohli have officially patched up and here's proof....

Omg! This has to be the picture of the day...

A lot has been speculated about Anushka Sharma and Virat Kohli's on and off relationship. Although the couple hasn't really confirmed or denied their relationship status. But it's known to all that they had parted ways on mutual differences. In fact, talks even suggested how it was Anushka who wanted a break from Virat and the latter tried all ways to get her back in his life.However, wait until you check out this latest picture of the two posing all smiles for the cameras. Yes! This happened and you are going to so love it... Also Read - Yuzvendra Chahal's wife Dhanashree posts THIS comment on Anushka Sharma-Virat Kohli in an Ask Me session

Putting an end to all the rumours surrounding their love life, Anushka joined Virat to celebrate RCB's win against Gujarat Lions on May 14 and boy, is this the happiest picture of the two posing together? Their wide smile speaks volumes of the warmth they share. So comfortable, so happy in each others' company. Oh! How we have been longing for this reunion? Also Read - Trending entertainment photo gallery: Rubina Dilaik, Sriti Jha, Anushka Sharma, Alia Bhatt, Shanaya Kapoor and more unmissable celeb pictures of the day

Not to forget, earlier last month, Anushka and Virat were even spotted on a dinner date post Sultan wrap-up bash hosted by Salman Khan. In fact, even during Anushka's birthday this year, we got to see Virat - Anushka following each other back on social media platforms,proving patch up is just around the corner. Well, all said and done, that day definitely isn't that far when we'll soon get to see Anushka cheering for Virat at the stands? Maybe during IPL finals? Let's hope for the best until then, do stay tuned to BollywoodLife for more updates. Also Read - Unseen pics of Shraddha Kapoor, Alia Bhatt and more Bollywood actresses who are papa ki paris 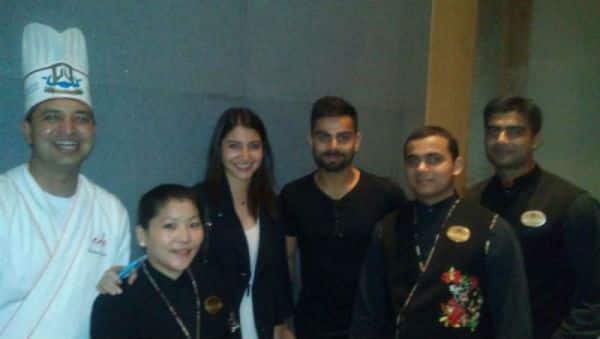