Anushka Sharma takes a metro ride in London and fans are in awe of Bhabhiji!

Anushka Sharma was last seen in Zero, alongside Shah Rukh Khan and Katrina Kaif. The Sanju actress is currently focussing on her production house Clean Slate films, which is curating content for digital platforms.

Anushka Sharma is currently in London, wrapping up her work commitments before she joins her cricketer hubby Virat Kohli at the end of this month. The actress recently took a tube ride and her happy click is winning the internet. Check out Anushka Sharma’s monochrome picture below: Also Read - Unseen pictures of Anushka Sharma and Virat Kohli’s Rs 34 crore plush abode gives a glimpse into their extravagant lifestyle – view pics

Speaking about Anushka’s outing in London, an eyewitness had revealed, “Anushka always travels by public transport when she travels. She loves to be with people, soak in the culture of a city and explore the country that she travels to. Anushka had a work meeting that she had to go to and she took the tube! She was absolutely fine to be taking the public transport and exploring the city of London.” Also Read - WTF Wednesday: ‘Are you pregnant?’ Dear fans, stop asking women in Bollywood and TV this cliché question

Interestingly, fans are showering Anushka with love on Instagram. Check out some of the comments on her post: Also Read - A look into the ultra luxurious vanity vans of Shah Rukh Khan, Alia Bhatt and others will make your head spin – view pics 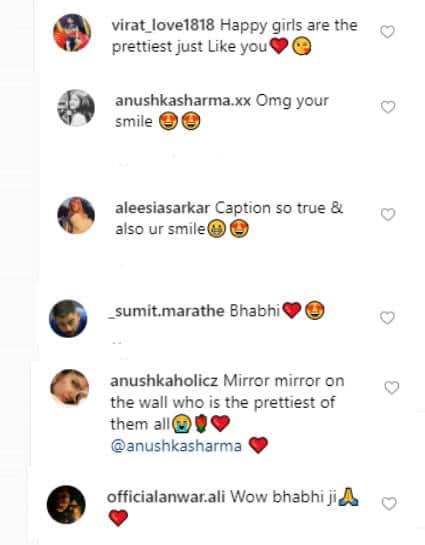 Earlier, Anushka had opened-up about hubby dearest and had said, "Everything is real. Also, the fact that we both support each other. He’s someone, who’s constantly trying to get better professionally and as an individual. I’m also like that. We don’t take ourselves so seriously. We’re similar people. That’s why we get along."

On the work front, Anushka Sharma was last seen in Anand L Rai’s directorial Zero, which released in December last year. The film, which also starred Shah Rukh Khan and Katrina Kaif, tanked at the box office. Speaking about her future plans, Anushka had told Hindustan Times in an interview, "In the past three years, I have been working in a fashion which was very hectic, and have done roles which were extremely demanding. In one calendar year to do a film like Pari, Sui Dhaaga and Zero, it’s not easy and takes a toll on you. All are different, and required a lot of prep. You feel you want to sit back and take a call. I think I have reached that position and security as an actor in my career, where I don’t need to do things or sign films just because I have to fill up time."

The Sanju actress also added that she is currently focussing on her production house Clean Slate films, which is curating content for digital platforms. "Being a producer, I anyway have my hands full, we are doing some interesting work. We have been producing shows for streaming platforms, a film too. Those are things that also require my time, and in my case, it’s very different. I am an actor at the same time. There are things that I do behind the scenes, which obviously people are not going to be privy to. I want to be able to focus on that… I also want to be able to look back and see what I have done. I am satisfied with the work I have done. I have always been like that, picky with the work I have done. I have chosen different kinds of movies and roles for myself,” said Anushka.