We've found out that Anushka Sharma's Phillauri may be a copy of Johnny Depp's animated film, Corpse Bride. Check out their trailers. 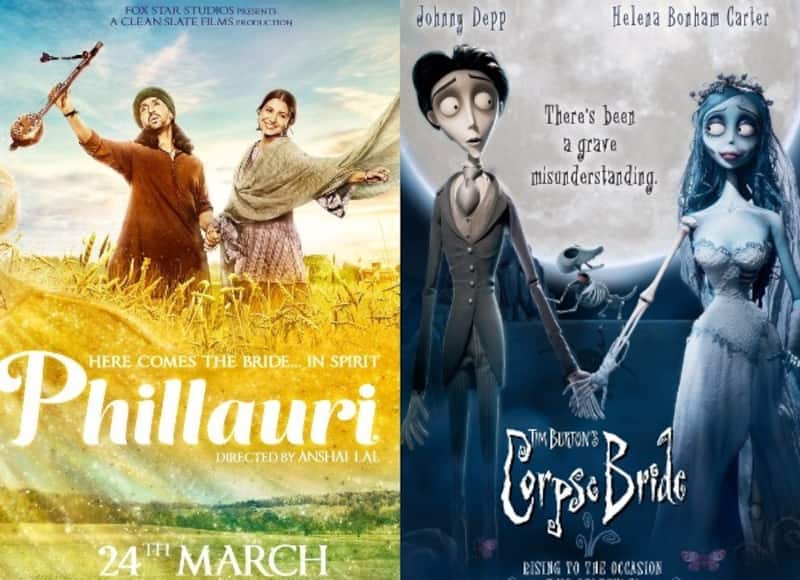 There have been so many reports stating that Anushka Sharma is a witch in Phillauri. Of course, this was a point enough to leave fans excited! But guess what, it's not really original. Anushka Sharma's Phillauri trailer has literally been taken right out of a Tim Burton movie! Not many may know about this but the plot of the film is exactly like Corpse Bride, an animated film helmed by the director. Starring Anushka, Suraj Sharma and Diljit Dosanjh, the trailer of the film recently surfaced and boy are people loving it! However, the minute we saw the trailer, it took us right back to the 2005 Hollywood film starring Johnny Depp, Helena Bohen Carter and Emily Watson. The similarities of the plot are strikingly similar. In case you haven't watched the trailer of Phillauri, we'll give you an idea of what the story comprises of. Thanks to being a manglik boy, Suraj Sharma has to first marry a tree and then traditionally get married to the girl his parents have set him up with. However, in order to settle for a happy marriage, he ends up tying the knot with the ghost living in the tree. Also Read - Trending Hollywood News Today: Run BTS is back, Hailey Bieber talks about having kids with Justin Bieber and more

Enter Anushka Sharma. After all the confusion that ensues because of this "ghostly" marriage, finally Suraj and his bride-to-be decide to confront Anushka and ask her what unfinished business is that has kept her stuck on the planet. Enter Diljit Dosanjh. Now there's a lot of romance going on between Anushka and Diljit but we don't know how the end is going to turn out like because, for that we'll have to watch the movie. Unless, even the end has been take from the Hollywood film. Let's talk about Corpse Bride now since we have spoken quite a lot about it. The Tim Burton film is a musical animated that revolves around the life of Johnny aka Victor who is betrothed to Victoria (Emily Watson). They are about to get married but in the nick of time, Victor gets cold feet and runs away. Of course, he does return, not alone but with the corpse bride (Helena Bohem Carter)! Basically, he mistakes her finger to be a twig and practises putting a ring on it. (ALSO READ - Phillauri trailer: Anushka Sharma's comic horror film is full of cliches) Also Read - Pirates of the Caribbean star Johnny Depp all set to make his directorial comeback after 25 years [Deets Inside]


Well, rings a bell now? The premise of Phillauri is an exact rendition of Corpse Bride and in fact, we suggest you watch trailers of both the film. While Anushka's film is more bright and lively, Burton's movie holds a dark twisted tale which pretty much fits his style of directing. A lot may not have come across this film but we can guarantee that a Tim Burton fan would be the first one to spot the similarity. Anushka's film is all set to release on March 24, 2017. Also Read - Johnny Depp-Amber Heard defamation trial: Lawyer Camille Vasquez reacts to her viral video calling her client an 'abuser'