'Are all men like this?' Mira Rajput asks netizens as Shahid Kapoor creates a mess in the house

While Shahid Kapoor and Mira Rajput can't stop gushing about each other on social media, Mira recently complained about Shahid by shared a picture of him creating a mess in the house.

It wouldn't be wrong to say that Shahid Kapoor and Mira Rajput's relationship is a perfect love story. It was no less than a filmy one for sure. The two got married at a private ceremony in Gurugram in July 2015. They welcomed their first bundle of joy, a daughter named Misha in August 2016 and had their second child, son Zain in September 2018. And while the two can't stop gushing about each other on social media, Mira recently complained about Shahid by shared a picture of him creating a mess in the house. Also Read - Trending Entertainment News Today – Indian Idol 12: Anjali Gaikwad's elimination leads to fury amongst fans; Saaho actress Evelyn Sharma ties the knot

Mira took to Instagram stories to share a picture of a pair of shoes and socks, which presumably belong to Shahid, lying on the carpet. And it seems like Mira didn't like it a bit and asked her fans, 'Are all men like this?' While we wonder what Shahid would have to say about this picture, it certainly cracked us up like never before. Take a look. Also Read - Shahid Kapoor and Mira Rajput's social media PDA will make you believe in old school romance - view pic 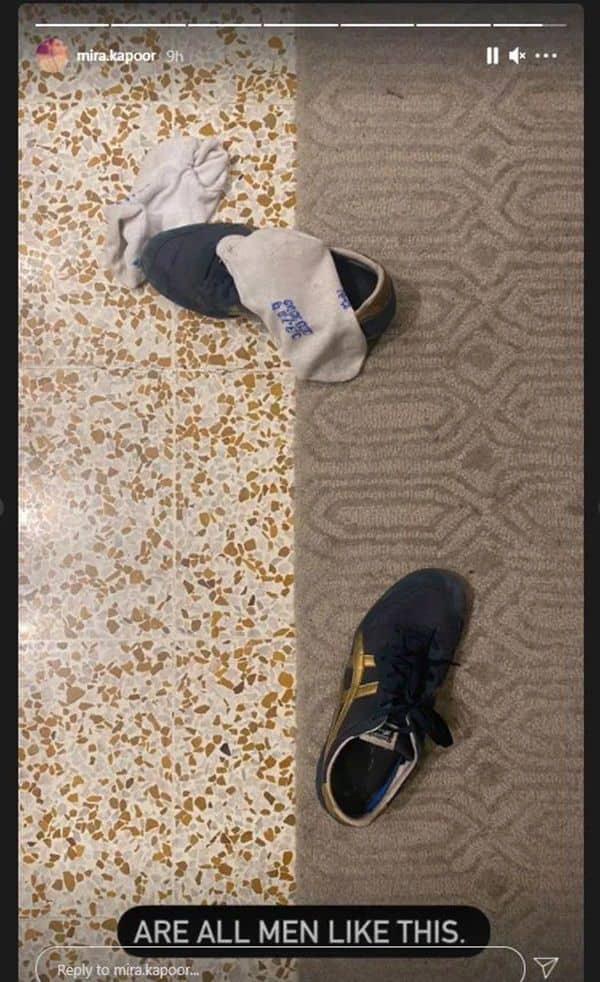 Shahid and Mira’s social media PDA is one of a kind. They put up random pictures when missing one another. Of course, the mandatory birthday and anniversary posts are there. But Shahid and Mira’s loved up posts always leave us gushing.

On the acting front, Shahid will be next seen in his upcoming film Jersey. The film will see the actor in the role of a cricketer. It is a Hindi remake of the Telugu hit of the same name. The Hindi version is being directed by Gowtam Tinnanuri. The story is about a talented but failed cricketer named Arjun, who decides to make a comeback in his late thirties and play for India, in order to fulfil his son's wish. He will also be seen in Raj and DK's action thriller web series, which marks his debut in the web world.