Are Karan Johar and designer Prabal Gurung dating? The internet thinks so!

Fashion designer Prabal Gurung also took to Instagram to wish Karan Johar on his birthday, albeit with a confession that the entire nation is going bonkers over right now! Check it out!

Karan Johar, the celebrated director of our times, who is also a bonafide fashionista BTW, turned a year older recently and it was pouring wishes for the filmmaker. The entire B-town came together to wish their friend, pal and confidante. From old buddies like Farah Khan, Sonali Bendre to his students- Alia Bhatt, Varun Dhawan, Ananya Panday, social media was flooded with messages and wishes for the man of the moment, who let's just say, is making 47 look extremely good and classy!

While we are still that, it is imperative to note that he keeps of company of similar people for redefine class and modern day sophistication. Case in point, globally renowned fashion designer Prabal Gurung. Who in turn, also took to Instagram to wish the director, albeit with a confession that the entire nation is going bonkers over right now! The designer shared a picture with Karan and wrote, "Pyaar Kiya To Darna Kya. Happy birthday KJo." Check out his post here. Also Read - Karan Johar announces an action film; from Hrithik Roshan to Kangana Ranaut, netizens wish to see these actors in it

Now, we are not joining two and two but the internet seems to be shipping both the stalwarts. Yes, KJo did leave a sly comment that read, "Control yourself bhaiya! ???", fans are busy speculating that they are indeed dating. See for yourself. Also Read - After Rocky Aur Rani Ki Prem Kahani, Karan Johar announces his next Action Film [Deets Inside] 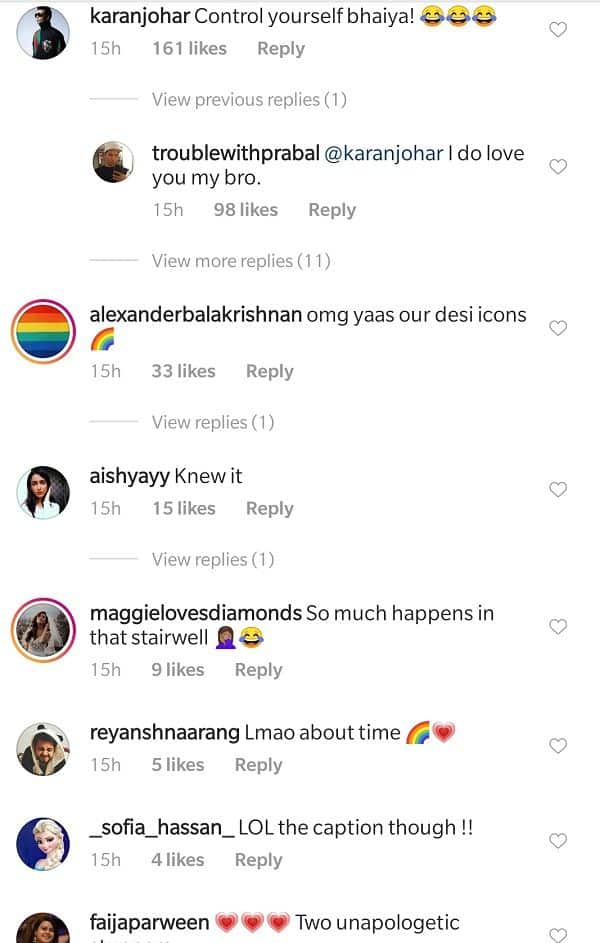 See what we see?

On the work front, KJo is gearing up to return to the director's chair with his ambitious project Takht which is a multi-starrer featuring Kareena Kapoor Khan, Ranveer Singh, Vicky Kaushal, Alia Bhatt, Janhvi Kapoor, Anil Kapoor and more. Anyway what do you think of the entire episode? Let us know, tweet to us @bollywood_life!