Arjun Kapoor pens emotional note on mom Mona's death anniversary, says 'I miss having ur name show up on my phone to check up on me'

Arjun Kapoor pens emotional note on mom Mona's death anniversary, says 'I miss having ur name show up on my phone to check up on me'. She passed away eight years ago

Arjun Kapoor has been diligently telling people to follow all the coronavirus guidelines set by the government. Today, it is the death anniversary of his mother, Mona Shourie Kapoor. Arjun Kapoor who was very attached to his mother has posted an emotional note on Instagram. He has written about how he has spent life without her. Arjun Kapoor has written that his sister, Anshula and he have tried to pick up the pieces and move ahead in life. He said some days are harder than the rest but they are managing. He also regretted not being able to give her much time when she was undergoing chemotherapy. Check out the emotional post below... Also Read - Arjun Kapoor REVEALS what kind of equation he shared with Janhvi Kapoor before and after Sridevi's death

I wish I could be at home like this today would have felt safe & maybe even smiled more than anyone has ever seen me smile. It’s been 8 years today since you left us Mom... the world has come to a standstill now but mine & @anshulakapoor s world was shattered when u left forget standing still.... we have tried to pick up the pieces some days are tougher than others though... I’ve managed to survive 8 years of being an actor & a working individual she’s also started her own business with @fankindofficial !!! Anshula more or less runs the house and I run to her if I need something in the house or in life... the world has changed Maa right now in this moment I wish I had you at home would have spent so much time with u that I couldn’t when I was trying to lose weight do my acting classes and when I was away shooting ishaqzaade during ur chemotherapy... would have tried to make up for the nonstop sprinting that I would have been upto and maybe taken u for granted... I love u Maa I miss u Maa... I miss having ur name show up on my phone to check up on me... I just hope wherever you are you are happy and watching over ur 2 brats ?

On the occasion of her birthday that fell on February 3, he wrote, "Happy birthday Mom Love You. I hope ur smiling right now whenever you are... this picture was the last birthday we had together and I just assumed we would have many more... it’s selfish to say I miss you all the time but I really do ya... I try & be strong cause that’s the way society expected me to be at the age of 25 when I lost you forever... they all expect u to figure it all out with ur life taken away from you I was supposed to sorted & what not... but I’m not strong enough on most days... I just ride it out... anyway as usual I sit and complain & trouble u with my non sense... happy birthday Mom wish we had more time together...." Also Read - Malaika Arora leaves us ABSOLUTELY awestruck as she redefines smokin' hot in her latest photoshoot — view pics 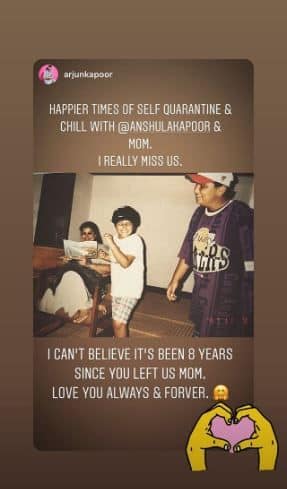 The actor has a project in the pipeline with Rakul Preet Singh. In the past few years, everyone has admired how Arjun Kapoor has become a pillar of strength for his family. Stay tuned to BL for more scoops and updates!