Arjun Kapoor was spotted on the sets of Shah Rukh Khan's film. Can you guess which one?

Shah Rukh Khan has been around for more than two decades now and has seen the present lot of actors growing up. Today, they are doing movies. We have stumbled upon a picture of Shah Rukh Khan with Arjun Kapoor which took us by surprise and we must say it's a pleasant one. See this picture. Can you guess this film, because we surely took some time to come to a conclusion.

So there's a unkempt looking Shah Rukh watching something on the monitor perhaps, wearing a checkered shirt and tousled hair. There's Boney Kapoor next to him looking in the same direction. Beside him sits the chubby Arjun Kapoor, yes that's Arjun for you. Geeky, nerdy and chubby, Arjun was a far cry from what he looks now. So could you figure out the film here? Fine we will tell you. This seems like the behind the scene image of Shakti, where Shah Rukh did a cameo appearance. Ishq kameena? Ring a bell? Of course it does. Shah Rukh did a great job in the film despite having a small role in it. Also Read - Trending Entertainment News Today: Shilpa Shetty and Raj Kundra put divorce rumours to rest; her bodyguard wins hearts and more 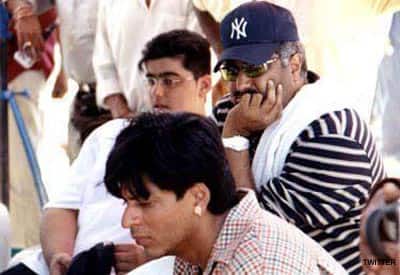 And Arjun wasn't the only star kid on the sets of Shakti. Shah Rukh's daughter Suhana who was very young at that time was also part of the shoot. There are pictures on the internet where the toddler can be seen walking on the sets looking adorable. Aishwarya Rai Bachchan, who also danced with SRK in the song, can be seen playing with her as well. So AbRam, you aren't the only one who got the privilege of being on papa's sets. Your elder siblings were part of it too. Aryan was there on the sets of Kabhi Khushi Kabhi Gham.

We wonder if Arjun even remembers this image.