Arjun Kapoor uses the F-word and gets trolled by Amitabh Bachchan!

Have you ever seen Amitabh Bachchan troll anyone and that too ever-so lightly? Well he recently did and Arjun Kapoor will remember it all his life

There's a lot the young can learn from the old...

Amitabh Bachchan may be beyond 70 years of age. He may be around in the industry for over 40 years. He may have seen all the changes that Bollywood went through since he stormed into it. He has seen the rapid growth of Shah Rukh, Salman and Aamir Khan to superstars whose stardom is beyond imagination. He has seen the surge of social media and its effect on people. He has also seen young actors making a mark now. Best part about this actor is despite his age and humongous experience, he can be a young with a young actor. Now we all know how active AB is on Twitter and is often seen interacting with other actors on the medium. But have you ever seen him troll anyone and that too ever-so lightly? Well he recently did and Arjun Kapoor will remember it all his life. And did I mention about a certain F-word that was used? Also Read - 'Beauty', Navya Naveli Nanda's latest pic leaves Deepika Padukone floored

Arjun was expressing something aloud on Twitter that we all have been thinking. It's June, where did half of the year go by. The actor wrote, "Half the year s almost gone !!! June is here !!! For F**K sake how is time flying so fast !!!" We hear you, lad! We were discussing the exact same thing when you said it on Twitter. But it's not the expression that Bachchan picked on but the spaces between the F-word. He replied to the tweet saying, "@arjunk26 @MosesSapir .... the day you realise you should not be filling in those blanks ..!! hehe." It was a facepalm moment for Arjun but the actor was quick enough to acknowledge that. He wrote, "Oh god !!! Gonna pay heed to ur advice & never fill those blanks Amit Uncle !!! @SrBachchan @MosesSapir." Also Read - WTF Wednesday: From Malaika Arora-Arjun Kapoor’s age difference to Deepika Padukone-Ranveer Singh holding hands – 5 times celebs were trolled for weird reasons 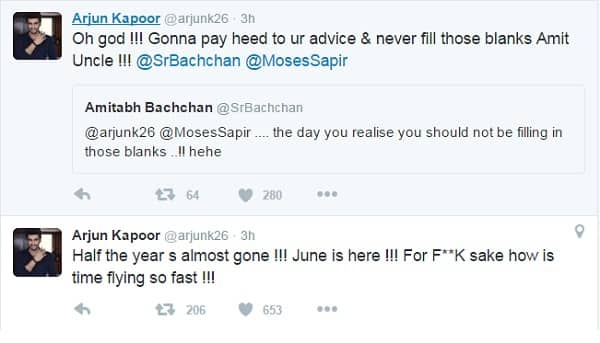 Slow clap for Mr. Bachchan for the nth time maybe!