Once again Mubarakan actress Athiya Shetty's love life is in talks after Vikram Phadnis pulled her leg on social media. As we reported the actress is rumoured to be dating Indian cricketer KL Rahul.

BollywoodLife was the first one to break the news of Athiya Shetty allegedly being involved with Indian cricketer KL Rahul. A little birdie close the cricketer chirped into our ears that the two have been going strong with each other. However, the two maintained a stoic silence on the entire report which widely spread soon. Cut to now, Shetty's close friend and designer Vikram Phadnis is out and openly pulling her leg. And interestingly Phadnis also used KL Rahul's name to tease the Mubarakan actress. Also Read - THESE pictures of lovebirds Athiya Shetty and KL Rahul are too adorable to miss

Well, it happened so that the actress posted a generic motivating post on Instagram. On it, Vikram Phadnis used KL Rahul's initial to tease her publicly. 'You seem to be v hyper and excited these days ??? Let’s go to KL ??? ..... Kuala Lumpur ???? ?,' Phadnis commented. He was also on a comment spree. He left another one read, "I will complain to the UMPIRE !! @athiyashettyand once your WICKET is gone ... it’s back to the pavilion !!!" Also Read - Vicky Kaushal jetting off the city, Kangana Ranaut snapped outside a dubbing studio and more – 5 celebs that were papped in the city today

As the leg-pulling spree continued, Athiya remained silent, however, she just left one comment replying to Phadnis' which read, 'TIME to block you!' Well clearly the fun banter between the two friends is going to go offline as well. 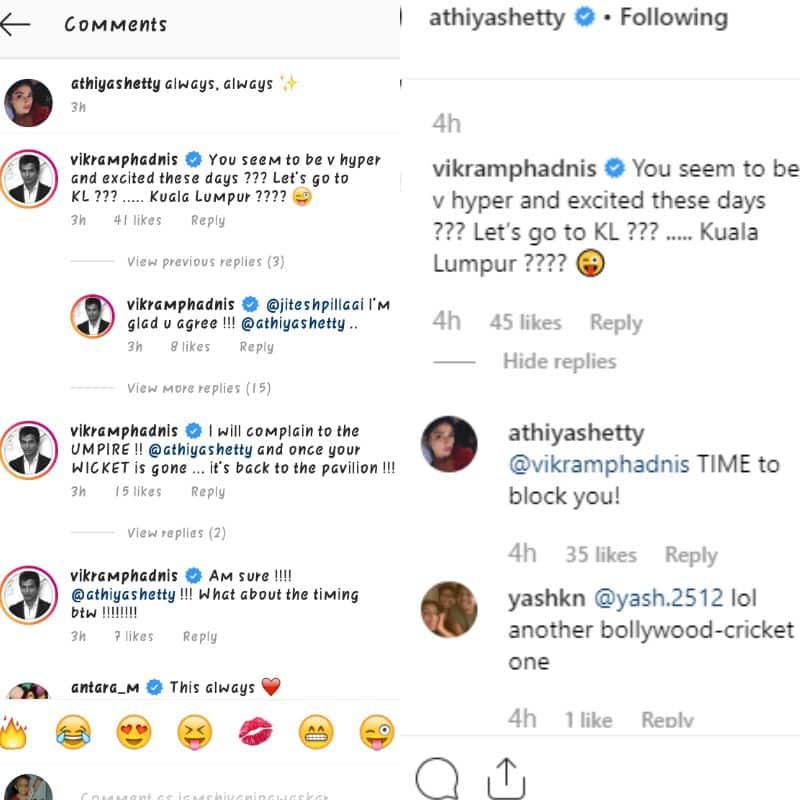 Amidst all this, the fans have been quite happy with the confirmation that Phadnis gave on Shetty's behalf. One of the comments read, "oh! Finally it's confirmed.. Days of speculations come to an end.. Don't know I'm happy or sad.. "

Well, we are just hoping that the couple soon comes out in open about their relationship and sheds more light on it.