Avengers: Endgame star Robert Downey Jr. shares a throwback pic from a lunch hosted for the women of MCU

Avengers: Endgame is breaking box - office records all over the world. We know that the film was shot with a great deal of secrecy with cellphones not being allowed on the sets. However, ever since its release a lot of actors are sharing throwback/BTS from the shoot of the epic fantasy film. Robert Downey Jr has posted a picture on Instagram where he can be seen hosting a lunch for all the women of the Marvel Comic Universe. Fans are missing Black Widow actress Scarlett Johansson is missing from the picture and fans have pointed it out. In the film, Natasha sacrifices herself so that Hawkeye can bring the Soul Stone to the rest of the Avengers.

Avengers: Endgame movie review: The most befitting tribute to the most loved superhero franchise in the world

#tbt #throwback #flashback to the #Women of @marvelstudios #mcu lunch I had the pleasure of hosting... #girlpower #epic #bts (? @jimmy_rich ) #TeamStark #thankyou good-times getting the ladies together... 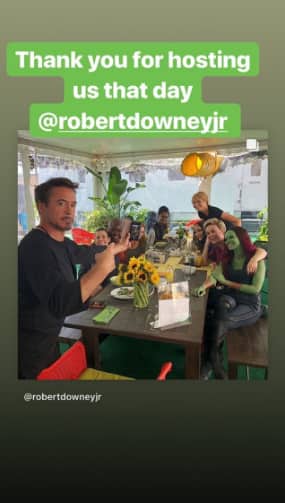 A couple of days back, Chris Pratt who plays the Star-Lord shared a video where all the characters could be seen chilling on the sets. He said it was illegal to record a video but he would not let an historic moment pass by like this. We totally second that! Also Read - Marvel fans put up billboards in LA for Robert Downey Jr's Tony Stark aka Iron Man; are we going to see his return? — deets inside

I remember being blown away in this moment on the @avengers set. Nobody was allowed to film anything on their phones. I said screw it. No rule was going to stop me from seizing this once in a lifetime opportunity to capture this collection of stars, a groupthat likely will never be in the same room again. We are so blessed.

In India, Avengers: Endgame has crossed Rs 200 crores in five days. This is fantastic for a Hollywood film. It looks all set to cross the Rs 400 crore mark. The dubbed versions are also doing well.

BollywoodLife's editor-in-chief Tushar P Joshi said, "I watched the film like it should be, without an intermission and it served me tea that I wasn’t ready for! The sheer magnitude and canvas of the climax of Endgame is hard to put down in words. The only other final chapter that comes close to this befitting franchise might be Return of the King from Lord of the Rings series. But that’s a different universe and the Avengers bring a different connect with its fans." Stay tuned to BL for more scoops and updates!