It happened to be Pragya Yadav's son Shamsher's birthday on the day and Mira Rajput shared an adorable picture of the two little munchkins playing together. Shamsher turned one yesterday and Mira took to her social handle and wished Shamshera on her and Zain Kapoor's behalf.

Shahid Kapoor and Mira Rajput's daughter Misha Kapoor recently turned 3 and a big celebration took place with Misha's cute little friends and family members in attendance. Both Misha and Zain are quite popular, thanks to their mommy Mira who is quite active on Instagram. Mira Rajput Kapoor loves to shares cute antics of both her children with people. And we gotta admit, this dose of cuteness brings a refreshing break in our otherwise monotonous life. It's like seeing them grow up, although virtual. Nonetheless we enjoy it.

And that's what happened. Mira shared a snap on her Instagram handle from Zain's one of the playdates. It happened to be Pragya Yadav's son Shamsher's birthday on the day and Mira shared an adorable picture of the two little munchkins playing together. Shamsher turned one yesterday and Mira took to her social handle and wished Shamshera on her and Zain's behalf. Sharing the image, she wrote, "Happy birthday first friend Shamsher" She further jokingly wrote, "Do they know we ate the toast from the floor." Have a look at the picture here: 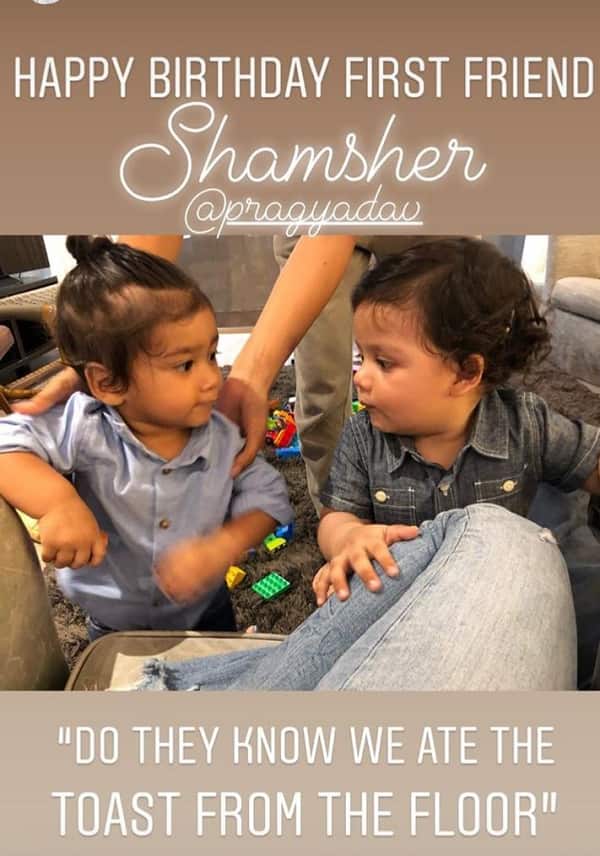 This has to be the cutest wish ever! Don't you think?

Happy birthday, Misha! These adorable pictures of Shahid Kapoor's daughter will brighten up your day

Meanwhile, Shahid Kapoor is currently basking in the success of Kabir Singh. The film also starred Kiara Advani and it was an official remake of South film Arjun Reddy. Shahid played the role of a character that goes through a self-destructive phase. The film was slammed by many for glorifying "toxic masculinity" and not being as good as its original Arjun Reddy. Still, it has raked in over Rs 260 crore at the box office. For more scoops and updates, stay tuned to BollywoodLife.