Baaghi 2 review: Tiger Shroff-Disha Patani's film saves itself from becoming just another whodunnit by turning into a full-fledged action fest 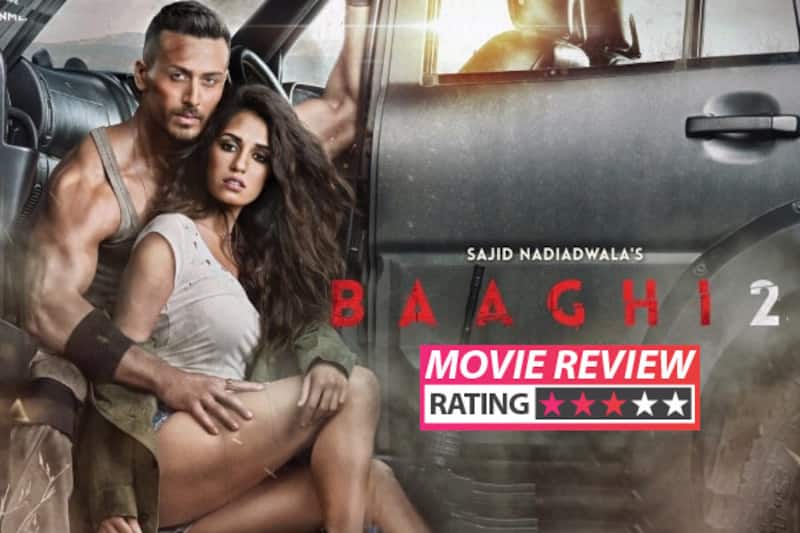 A damsel-in-distress seeking help from a saviour with a heart of gold - Baaghi, as a franchise, is as predictable as it gets. But it worked in the favour of the first film and so, a second film has been spun on the same premise. This time around, though, quite a few things have changed. For starters, instead of Sabbir Khan, who was at the helm of the first film, choreographer-turned-director, Ahmed Khan has been roped in to take on the director's chair. The film's leading lady, too, has changed. So while the first film had a spunky Shraddha preening for the cameras, this one has Disha Patani acting as Tiger Shroff's love interest. Apart from this, there's also the lure of the supporting cast comprising of interesting names such as Randeep Hooda, Prateik Babbar, Deepak Dobriyal and Manoj Bajpayee. Given how the first film had worked for the makers, it is not difficult to see why they pulled all stops when it came to backing the second film. But will it pay off? Let's find out... Also Read - Sushmita Sen trolled as 'baigairat' for watching Laal Singh Chaddha with ex; times when actresses were slammed for their life choices

What's it about?
Army officer Ronnie (Tiger Shroff) is as ruthless as he is patriotic. He is a smooth operator when it comes to tackling a bunch of terrorists, without much help from his comrades. And just when you are thinking that he might be taking on national issues, helping the country solve some major crises, he is summoned by his beloved Neha (Disha Patani), who needs his help to find her daughter, who seems to have been kidnapped. Also Read - After break-up with Disha Patani, Tiger Shroff is dating THIS hottie? Here's what we know

We are then offered a glimpse into Ronnie and Neha's past, which looks as sweet as candyfloss. He is the college jock - a guy who girls have crushes on, and she is the diva, whom no one can dare to even think about dating. But they like each other and the rest, as they say, is predictable. Enter Neha's cancer-struck dad, who blackmails her with his own imminent death, to marry the guy of his choice. ALSO READ: Baaghi 2 box office occupancy report: Tiger Shroff and Disha Patani’s film is off to a remarkable start Also Read - Raksha Bandhan 2022: Deepika Padukone's sister Anisha Padukone to Aishwarya Rai Bachchan's elder brother Aditya Rai – 14 celebrity siblings who have stayed away from limelight

And it would just be a sad love story had it not been for the guy who was Neha's dad's choice. It's thanks to him that poor Ronnie is pulled out of his base in the mountains, where he seemed content in spending the rest of his life. In Neha's world, he finds himself impersonating James Bond more than the Rambo he was trying to be all through the film. Snooping for clues, impersonating police officers and looking for evidence, Ronnie ends up doubting Neha in the process.

But just when you think that the film is turning out to be a whodunnit instead of the action fest you paid for, the makers lay out a playground for Ronnie. However, will he be able to find Neha's daughter? That's for you to find out, Sherlock!

What's hot
When allowed to defy gravity and flaunt some flying kicks, Tiger Shroff seems to be a child on a sugar high. And it is indeed a delight to see him take on a whole army of baddies. You can see that he is at home when he is getting beaten down to a pulp or sending his arch rivals flying in the air after having cracked their bones, mouthing dialogues like, 'Jo tumhara torture hai, woh mera start up hai.' Unlike his previous films, here he is not trying to be the overly sweet guy with a penchant to prove his point by repeating the same dialogue over and over again. His restrained, angry Ronnie holds the film together and manages to rope you in to side with him and seek revenge. Allowing him to shine is the supporting cast. A splendid Manoj Bajpayee, as the quick-witted DIG, an uber cool hippie ACP, Randeep Hooda, and a rather harmless looking, deceptively cunning car dealer, Deepak Dobriyal - all help Tiger do what he does best - deliver some kickass action scenes. ALSO READ: Baaghi 2 celeb movie review: Vivek Oberoi, Sudheer Babu are blown away by Tiger Shroff – Disha Patani’s performances

What's not
Tiger Shroff. Yes, he is indeed impressive with his action chops but when it comes to emotions, he has a long way to go. Quaking when required to emote anger, and whispering dialogues to convey he is heartbroken isn't acting. So while he is a delight when he is dancing and breaking bones, he still has to work on his nuances quite a bit. Disha, as the wide-eyed deer caught in the headlights, is offering nothing new. If she has acting talent, we need to see her live through an entire film, so that we can judge as to what she has to offer. Prateik Babbar, as a junkie, is deplorable. He gets his kicks out of snorting cocaine and watching a rather loud Jacqueline Fernandez dance to a badly mixed '90s song. There's a reason why subtlety is an art - not everyone gets it. Apart from these, the basic premise of the second film in the franchise, is more than a little hard to digest. It seems like the plot of most of the '90s films with a few twists and turns thrown in for good measure. For how long will we use drug-peddling as a means to give the hero of a film a chance to show off his action skills?

What to do?
Some whistle-worthy dialogues that will remind you of Sunny Deol and some well-choreographed action scenes, make Baaghi 2 a decent watch. However, if you don't get high on seeing an unbelievably ripped Tiger Shroff take on an entire army of baddies, you can give this one a miss.