Babumoshai Bandookbaaz movie review: Nawazuddin Siddiqui is terrific in this violent saga of blood and betrayal

Babumoshai Bandookbaaz should be part of your weekend plan. 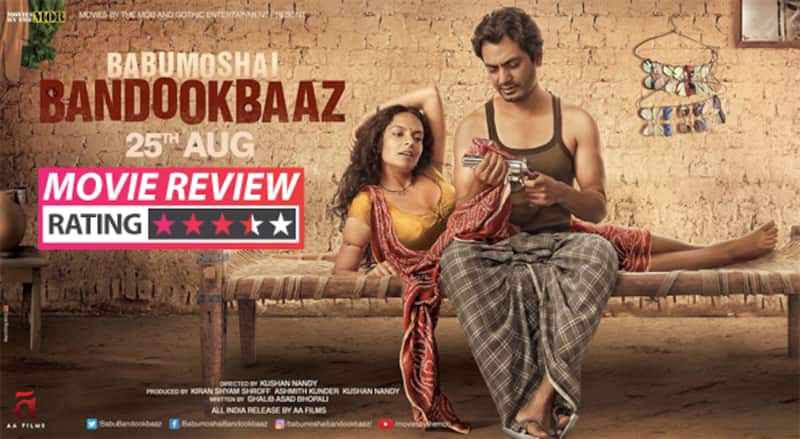 There is no doubt that Nawazuddin Siddiqui is a terrific actor, but he never enjoys box office success as a solo lead. Now with his recent release, Babumoshai Bandookbaaz, will things change for the better for this talented actor at the box office. Babumoshai Bandookbaaz is directed by Kushan Nandy and also stars Bidita Bag as the female lead. Here's our review… Also Read - From Shah Rukh Khan to Deepika Padukone: Non nepo stars who are ruling Bollywood like a boss

What's it about Also Read - Ahead of Katrina Kaif's Phone Bhoot release, a look at Ranveer Singh, Kriti Sanon and other stars who experienced paranormal activities for real

Babu Bihari (Nawazuddin Siddiqui) is a dreaded assassin with a cent per cent record. He is often hired by two rival politicians, Dubey (Anil George) and Sarita jiji (Divya Dutta) to eliminate their rival opponents. During a contract, he meets and falls for Phulwa (Bidita Bag), a shoemaker with a feisty attitude. But he kills two men for her that turns him against Saritajiji. During another contract for Dubey where he has to kill three men of Sarita's, he has to compete with a younger assassin Bhanke (Jatin Goswami), who looks upto him like a disciple. Over the killings, they develop a bond and become friends. However, little did Babu knew that Bhanke has a contract to kill a fourth man, and that happens to be Babu himself. Also Read - Trending Entertainment News Today: Puri Jagannadh's leaked audio over Liger distributors protests goes viral; Janhvi Kapoor reveals Vijay Deverakonda's relationship status and more

But Babu doesn't die, instead he returns from coma after 8 years to find out nothing has remained from his past. Swearing revenge, he thirsts for blood of the people who destroyed his life.

Babumoshai Bandookbaaz is a kind of movie that you normally associate with Anurag Kashyap, falling in the same league as Gangs of Wasseypur and its ilk. It is violent, full of dialogue-baazi and twists and doesn't swerve away from showing the rawness of lovemaking scenes and killings. If you have an appetite for such kind of movies, then Babumoshai Bandookbaaz is recommended for you. Kushan Nandy has delivered a more than decent political gangster drama with twists galore. While the first half is lighter in a black comedy sort of way, the second half is more serious and grim. It is to Nandy's credit that he has managed to find a balance between both the tones. But even in darker scenes, you find some nuggets of black humour.

One of the scenes that stand out is that impromptu dance that Phulwa performs for Babu, with Bhanke joining in. You just don't know how it will end up. I also loved any scene involving that roguish cop, played terrifically by Bhagwan Tiwari. His domestic life is a hilarious take on gender reversal. The background score is fantastic, while the cinematography perfectly captures the dreariness of the lawless land. There are plenty of lovemaking sequences and abuses, earning Censor Board's ire, and thank God, they have been retained. The movie would have lost its essence without them.

The performances is another asset of the movie. Nawazuddin Siddiqui often challenges me to find new phrases to praise his performance. He is just fantabulous here. As both the lovelorn assassin with a hatke swag and the bloodthirsty revenge-seeker, he excels in both shades of the character. Bidita Bag is a revelation, she will amaze you with her boldness and histrionics in every scene she is in. Jatin Goswami is another great find. The supporting cast, involving Divya Dutta, Anil George (reuniting with Nawaz after Miss Lovely) and Murali Sharma, are fab.

The movie also delivers it's message that Crime never pays, as every bad character gets its comeuppance in one way or another.

When I had seen the trailer, I had an inkling that it is spoiling some of the major scenes in the movie. This turns out to be true, as many good surprises were shown in the promo. There are still plenty of twists that the trailer didn't explore, but I do wish they would have shown lesser such scenes in the promo. Also the pace drags in quite a few scenes in the second half. The item song and Shraddha Das' character could have been easily avoided. The final twist goes well with the nature of the movie, but not many can digest it. The portrayal of women in the movie may not go down with certain sections of the female audiences - Most of them are shown as sex and power hungry characters. But then every character in the movie is bad in various ways. But the same traits also apply to the male characters as well, so equality is maintained. The contract game between Babu and Bhanke also loses sheen after some scenes, mainly because Bhanke is written in a very confused way mainly in the second half.

Babumoshai Bandookbaaz is a violent drama filled with terrific dialogues, engaging sequences and fab performances, led by the always brilliant Nawazuddin Siddiqui. If you have taste for gritty gangster drama, with a sprinkling of dark humour, then this Bandookbaaz is for you.