Back in the US, this weekend for Priyanka Chopra is going to be all about Nick Jonas!

And they just wouldn't stop letting the world know how much they admire each other! After painting Mumbai red with their cutesy PDA, Priyanka Chopra and Nick Jonas are back to USA and looks like our Desi girl is getting highly impatient to see her guy perform on stage. Right after landing in LA, Nick posted a pic to announce his next gig saying, "Pumped to get back on stage! See you guys at @Villamix this weekend." And PC went all love struck in the comments as she wrote, "Can't Wait" Clearly, the two can't get enough of each other and we really don't blame them. After all, it's just been a few months since they have started dating. In fact, it's only since the last few weeks that the two seem to have got really serious about each other considering they have already introduced each other to their respective families. ALSO READ: [VIDEO ALERT] Watch how Priyanka Chopra officially introduced Nick Jonas to everyone at Akash Ambani's engagement party Also Read - Sushant Singh Rajput wanted to pursue Hollywood, planned his dream home in LA, says close friend Vishad Dubey

Word is that Priyanka and Nick might get soon get engaged in a month or so given that they recently exchanged promise rings which is said to be the first token of commitment. Let's see how things fall in place for Priyanka hereafter. Will they really get engaged? Or like how some suggest, they'll move in together? Check out Priyanka's comment on Nick's post below: Also Read - [HQ Pics] Sonam Kapoor feels like a Bollywood Princess as she returns from LA... at least that's what her sweatshirt says! 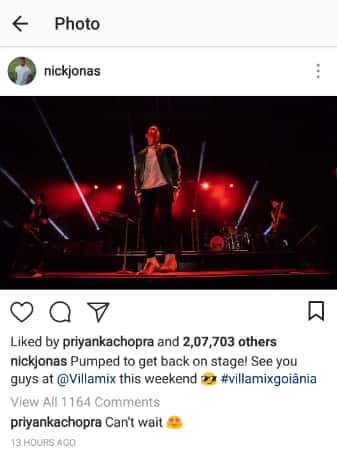 Also Read - Here's proof that Deepika Padukone's comfort food is SIMILAR to yours!

For those of you who don't know, Priyanka and Nick met during MET Gala, back in 2017 and have been in touch ever since. But it was only recently that they met again and decided to give their friendship a new name. Do you think this relationship will last for a lifetime? How much do you believe in PC and Nick's affair? Tell us in the comments below and keep watching this space for more updates.