Unlike Prabhas, Baahubali 2: The Conclusion star Rana Daggubati is a well known figure in Bollywood. The star made his B-town debut with Dum Maaro Dum (2011) and has, since then, worked in two more out-and-out Bollywood movies, including Department and Baby. However, everyone started talking about him after Baahubali: The Beginning hit the theatres and took over the nation! He was already a star down South, but became an overnight sensation across India and the world after SS Rajamouli's magnum opus released. While we all know how well his Bollywood films have fared at the box office, not many know about his Telugu hits. So we decided to dig up a little information and to our surprise, we found out that Rana Daggubati has amassed a massive Rs 850 crore at the box office from just 11 releases. Also Read - When Baahubali actress Anushka Shetty opened up about casting couch in the Telugu film industry

Yes, Rana Daggubati's filmography boasts of several hits in Bollywood as well as the Telugu industry. He debuted with Telugu film, Leader in 2010. 7 years and 11 films later, he has Rs 850 crore in his kitty, which is tremendous to say the least. But that does not mean he has not seen failure. His films like Leader (Rs 15 crore), Naa Ishtam (Rs 10 crore), Department (Rs 12 crore), Bangalore Naatkal (Rs 9 crore) did not perform well at the box office. However, super hit movies like Krishnam Vande Jagadgurum (Rs 46.80 crore) and Rudramadevi (Rs 70 crore) helped establish himself as a bankable star at the box office. The mega hit, Baahubali: The Beginning further enhanced his stardom, but his last release - The Ghazi Attack (Rs 35 crore) had a disappointing run at the box office. Check out the detailed box office track record right here: Also Read - WHAT! Bigg Boss OTT winner Divya Agarwal to star in Salaar with Prabhas and Shruti Haasan? Read deets 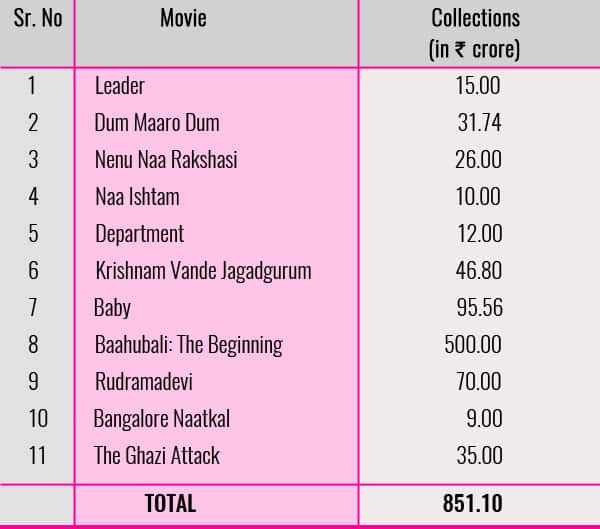 Also Read - Did you know Prabhas made a special appearance in THIS Bollywood disaster before emerging a pan-India star?

Though his last release did not live up to everyone's expectations, we guess Baahubali 2: The Conclusion will surely make him one of the biggest superstars in India. Trade expert, Akshaye Rathi (exhibitor and distributor) also mentioned, "There is no doubt at all about Rana's capabilities as an actor as well as his draw at the box office. After Baahubali: The Beginning he was propelled into the league of Ram Charan, Ravi Teja, Mahesh Babu and all these guys. With Baahubali: The Conclusion, we will see his popularity and stardom grow once again." (ALSO READ - Bahubali 2 movie review: Prabhas and Anushka Shetty's romance and stunning visual effects will leave you bedazzled)

Directed by SS Rajamouli, Prabhas and Rana Daggubati's Baahubali 2: The Conclusion is all set to hit the screen this Friday. From what we hear it is going to witness an insane run at the box office, so stay tuned to BollywoodLife as we get you all the dope right here...