It is a sad day. Music legend Bappi Lahiri is no more. India's disco king Bappi Lahiri has passed away at 69. He was suffering from obstructive sleep apnea since a long time. It seems he was doing fine till February 15, 2022 but his condition worsened after he was sent home. Bappi Lahiri passed away at Juhu's Criticare Hospital. The family said the funeral will happen tomorrow. In his career, he has composed songs for many movies of Amitabh Bachchan and Mithun Chakraborty. His partnership with Mithun Chakraborty is iconic. Condolences and tributes are pouring in social media. This is a huge loss for Bollywood, and the nation. After the death of Lata Mangeshkar, this is another huge blow. Also Read - Ajay Devgn to Shilpa Shetty: Bollywood celebs who became victims of robbery

Bappi Da was so endearing in person. But, his music had an edge. He introduced a more contemporary style to Hindi film music with Chalte Chalte, Suraksha & Disco Dancer.
? Shanti Dada? You will be missed

A heartfelt tribute to legendary music composer and pop culture singer #BappiLahiri Ji. May his soul rest in peace. My Condolences to the family.?? 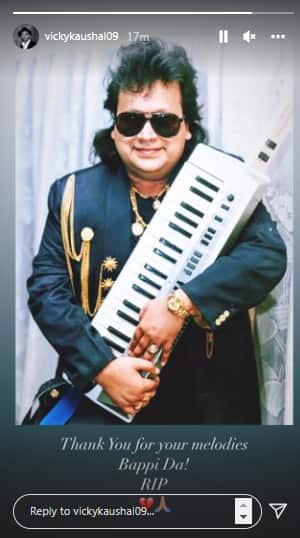 Also Read - Trending OTT News Today: Samrat Prithviraj to release on Amazon Prime on this date, The Lord of the Rings - The Rings of Power new teaser and more

Cannot process this loss.. i genuinely can’t believe that you’re gone. Will miss you so much Bappi Da.. I’ll never forget the love, support & encouragement you gave me as a little kid and throughout my career. May your kind soul rest in peace ?? #BappiLahiri pic.twitter.com/XQmM5OZ6hD

Met him last on 28th June, 2021.. we were recording for a Bengali song together. Who knew that it would be our last meeting.. life is so damn unpredictable ?

Today we lost another gem from the music industry… Bappi Da,your voice was the reason for millions to dance, including me. Thank you for all the happiness you brought through your music. My heartfelt condolences to the family. Om Shanti ??

Sad news of the passing away of legendary musician #BappiLahiri ji ?? he will be fondly remembered for his mesmerising musical compositions which are loved by people of all ages. My condolences to the family. RIP #BappiDa ॐ शान्ति ??

We all will miss you Bappi Da ? R.I.P #bappilahiri sir ? pic.twitter.com/fKwNbgc2ra

He was India’s First ‘ROCK STAR’!!
He was full of love & generosity!
Will miss him dearly…

Another legend gone. #BappiLahiri. Had the good fortune of working closely with him when I shot an ad for p&g and then when I worked with White Feather Films for @_SanjayGupta. Man of incredible melody and talent. pic.twitter.com/FlQUiPm9yl

An enormous loss to the World of Music.
You'll fondly be remembered for ages with your work #BappiLahiri sir.
My Deepest Condolences to Family and the near ones.
Rest in Peace. pic.twitter.com/zu2YekrtIg

Dearest Bappi Da, your music and you, both got smiles on our faces! We will miss you but you will always be with us through your music that will never ever stop!! Thank you for the smiles, Shine On Bappi Da ...!
We love you ! ❤ ? https://t.co/61abqcmlL7 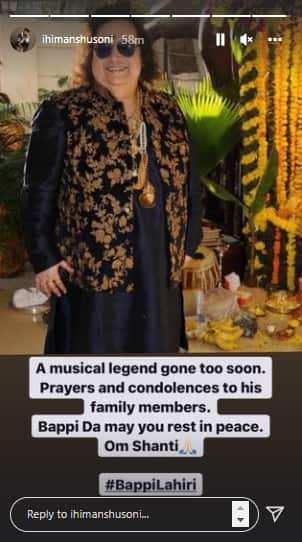 Bappi Lahiri will be remembered for his fabulous music and beats that brought so much joy in our lives. He always hailed Mumbai as his Karambhoomi. The musician had a crazy fan following in Russia and other East European countries.