Battle of the covers: Janhvi Kapoor beats Suhana Khan with her magazine debut

The verdict is out!

The verdict is out! After Suhana Khan's first ever magazine cover released, we asked you to decide something for us. We showed you Janhvi Kapoor's first Vogue cover and Suhana's as well and asked you to choose as to whose cover do you like better. Finally, we have a result and it is clear that you favoured Janhvi over Suhana. Also Read - Janhvi Kapoor goes topless and leaves little to imagination in her dare-to-bare photoshoot – view pic

57 per cent fans voted for Janhvi, making her win the poll. Janhvi’s first cover exuded floral and charm while Suhana’s colourful, chic avatar left us wanting for more. Janhvi, in a floral dress, is looking really pretty on the cover, if you ask us. We love the manner in which Vogue has tried to keep the youthfulness intact in these pictures and not tried to make a diva out of these girls. Janhvi’s cover came out much before the release of Dhadak. So she was yet to understand what stardom actually means. Today, she is Janhvi Kapoor but when the cover was out, she was Sridevi’s daughter ready to make her debut soon. Now she understands fame first-hand as the film is a hit. Suhana, on the other hand, looked absolutely chic! We loved the hues used on the cover, making her look fresh and exquisite. But guess people weren't too impressed with the outcome.

Before Janhvi Kapoor and Suhana Khan make their magazine debut, this star kid is already shooting for her second one 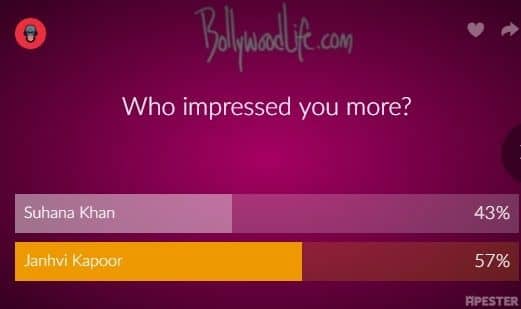 Well, guess the fact that Janhvi only recently delivered a hit with her first film must have helped her get more love from the audience.